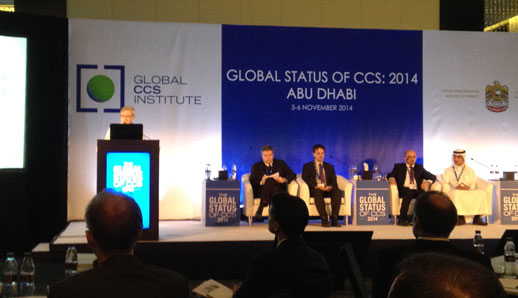 It was only last week when the United Nation’s Secretary General Ban-Ki Moon was discussing the need for humanity to move away quickly from carbon intensive energy sources as being essential for avoiding catastrophic climate change before the end of the century so the release of the “Global Status of CCS: 2014” in Abu Dhabi today was timely. The annual report by the Global CCS Institute covers the latest national developments in the efforts relating to CCS activities to fight dangerous climate change by adopting technologies to drastically reduce the carbon emissions from using fossil fuels in power stations and industrial plants. The challenge is particularly tough given the dominance of fossil fuels, remaining constantly over ¾ of the global power generation (1990-2010) and likely to remain so for the next few decades at least. This is even with the global investment (2004-2013) in clean energy being nearly $2 Trillion dollars, with CCS only taking just over 1%. Clean energy development in terms of renewables deployment has only kept pace with the global energy demand surge without having an impact on the share derived from fossil fuel based generation. Only CCS can impact the carbon profile of fossil fuel power and intensive industries. It was therefore great to hear this acknowledged by the GCCSI highlighting the role the UK is playing in the EU for CCS roll-out and that Emirates Steel Industries is the first CCS project that is non-power or CO2-EOR related joining the list of plants being constructed. In fact, since the start of the decade GCCSI have accounted a 50% increase in CCS projects either in operation or being constructed. This helps reinforces the message that the main challenges for CCS today are not technical but that of policy and support.

At this two day meeting in a gloriously chilly large ballroom (energy efficient I am sure!) in the desert oasis of Abu Dhabi the U.K. was well represented by speakers including Dan Byles (MP) – member of the Parliamentary Select Committee on Climate Change, Amy Clemitshaw – Deputy Director, Fossil Fuel Generation and CCS Policy, DECC, Tom Burke – E3G and our very own Prof Martin Blunt – Professor of Petroleum Engineering, Director of the Qatar Carbonates and Carbon Storage Research Centre and UKCCSRC thematic area champion for Petroleum Engineering. Prof. Blunt delivered a direct and punchy presentation covering the real need for the hosts to act soon given the potential impact climate change could have on coastal low-lying countries, such as those in Gulf. He gave an overview of the research being investigated since 2009 by the 10 year, $70m Qatar Carbonates and Carbon Storage Research Centre. He also delivered a summary 101 on CO2 storage, including the advances in understanding of pore scale phenomenon now achievable through “digital rocks” that allow us to image these processes whilst at representative reservoir conditions.

My closing remarks are focusing on the UK scenario. During his speech, Dan quoted that the CCSA had indicated that the UK should aim to have 10GW of CCS enabled power capacity by 2030 if it was to show leadership in this field – Is this achievable? Is this enough? Please discuss…….