This blog was written by Kazeem Rabiu, an Early Career Researchers at Loughborough University that was granted funding by the UKCCSRC’s ECR Meeting Fund to attend the Geophysical Modelling for CO2 Storage, Monitoring and Apprasal Meeting. 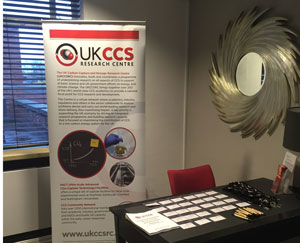 On 3rd November, 2015, the meeting started with the introduction by Lisa Roach. Jonny Rutqvist from Lawrence Berkeley National Laboratory gave lecture on modelling fault reactivity, induced seismicity, and leakage during underground CO2 injection. The lecture was well explained and some questions were entertained. Andrew Cavanagh from Statoil was the second speaker; his topic is 20 Years and 20 Mt: Statoil storage experience. It was an interesting topic. Some of the storage experience from Sleipner and Snohvit Statoil were well explained.

After the tea and coffee break, passive seismic monitoring for CO2 storage sites was discussed by Anna Stork of the University of Bristol. Thereafter, Giorgos Papageorgiou from University of Edinburgh gave lecture on the advances in rock physics modelling and improved estimation of CO2 saturation. Doug Angus from the host University, University of Leeds discussed assessing the uncertainty of time-lapse seismic response due to geo-mechanical deformation.

Afternoon session started by Quentin Fisher from the University of Leeds who talked about coupled flow, geomechanical and geophysical modelling: Software tools and research gaps were discussed. Following this there was a discussion by Jim White from BGS who shed more light on the monitoring, mapping and modelling of thin layers of injected CO2. The lecture session was concluded by Adriana Paluszny from Imperial College, London / EPSRC CONTAIN project who describe the numerical modelling of fracture growth and caprock integrity during CO2 injection.

Finally, poster session and networking by Early Career Researchers started. The topics of the posters were:

The assessors assessed the posters and asked some questions about the posters.  Laurence Cowton, a PhD student from the University of Cambridge got the price for the best poster “How thick is a thin layer? Monitoring CO2 injection at the Sleipner Field”. Feedbacks were sent to all poster presenters after the meeting which was very helpful.