Gas sample collection at PACT – Investigating how the CC influences monitoring of the S!

This blog was written by Stephanie Flude of the University of Edinburgh and also appears on her personal blog.

In January 2016, Stuart Gilfillan and I made the long drive from Edinburgh to Beighton, Sheffield to collect some gas samples from UKCCSRC’s Pilot-Scale Advanced CO2-Capture Technology (PACT) facility. The PACT facility hosts a state of the art, pilot-scale CO2 amine-capture plant that can capture CO2 in flue gases from either a 250kW air/oxyfuel combustion plant (that can burn coal, biomass or gas) or one of the two 330kW gas turbines also hosted at the facility. 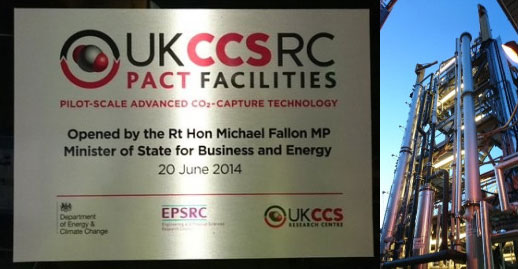 As we are Earth Scientists, rather than Engineers, we are researching reliable means to trace the fate of CO2 once it has been injected below ground for geological storage. As part of that research we are investigating how the captured CO2 itself can be used as a geochemical tracer. This means I have spent much of the last couple of years tracking down sources of man-made CO2 to sample, and swapping my usual field gear – walking boots, waterproof coat and rock hammer – for steel toe capped shoes, hi-vis jackets, torque wrenches and high pressure hosing. We wanted to collect as many different types of CO2 as possible – from different capture techniques and from different feedstocks, and so collecting samples from PACT was an obvious option. 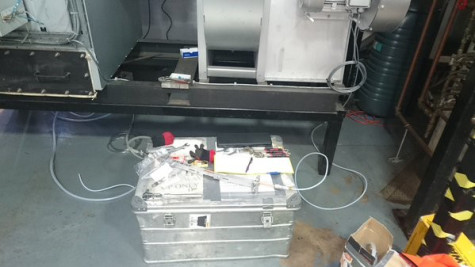 We had arranged to visit while both biomass and natural gas were being air-combusted in the 250 kW plant, allowing us to collect samples derived from two different fuel stocks. We were also hoping to collect gas samples from different parts of the carbon capture system, so we could better understand, and ultimately predict, what controls the inherent fingerprint of captured CO2. For this, we wanted to collect samples of the fuel, the combustion flue gas, the residual gas from the amine absorber column, and the final captured CO2:

The staff at PACT were very keen to help us collect this range of samples, but early discussions raised some problems with how to collect the samples. The PACT facility had been designed incredibly efficiently, with multiple gas analysis instruments housed on site that directly tap and analyse the gas of interest. Unfortunately for us, this efficient design meant that very few external sampling ports were installed on the system – why add sample ports when you can simply flow the gas you want straight to your analyser? After discussions with Kris Milkowski and Martin Murphy, we settled on the idea of collecting samples from the exhaust vent of PACT’s FTIR system, with some supplementary samples collected straight from an external tap on a combustion flue gas pipe. 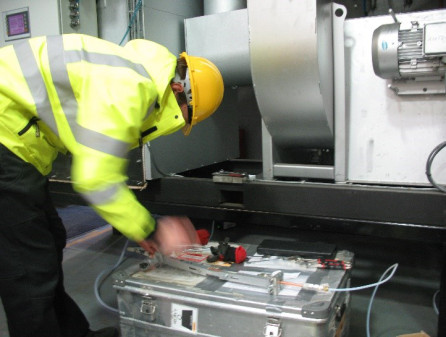 Once on site, we spent a few minutes working out the best way to connect our sampling equipment (copper tubes, clamps, and gas-sample bags) to the available ports and how to ensure a strong enough flow of gas to sample. We collected from the flue pipe first and then moved across to the FTIR hut. Sampling here was a little more hectic as we had a 4 minute window to collect the sample while the FTIR was purging the gas of interest. We need to be very careful to avoid air contamination in our samples, and standard procedure for this is to purge our equipment with the gas we are collecting for at least two minutes, leaving just two minutes to collect the sample and hook up the sampling assembly for the next sample. 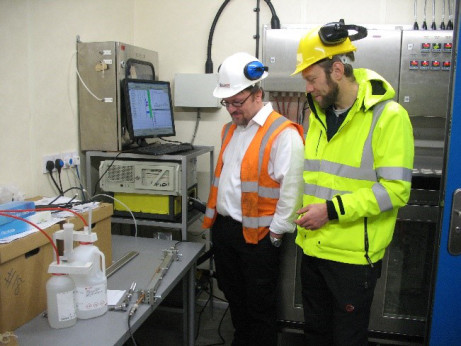 By the end of the visit, we had managed to collect combustion flue gas, absorber outlet, and captured CO2 from both gas and biomass feedstocks. With the critical sampling tasks out of the way, we were treated to a tour of the combustion rig by János Szuhánszki.

So what happens next? We have spent the last year analysing the samples for their inherent geochemical and isotopic fingerprint.  We have measured the carbon and oxygen isotope composition (δ13C and δ18O) of the captured CO2, and concentrations and isotope ratios of trace noble gases (helium, neon, argon, krypton and xenon) that are present in the captured CO2 stream. The results have just been submitted in a manuscript to the International Journal of Greenhouse Gas Control, so keep an eye open for that in the near future.