After attending the wrong parallel session on Wednesday – apologies to the CO2 impurities presenters – I agreed with Ciara that I’d blog on the Gas CCS session which took place on the Thursday. This turned out to be an easy task as it was one of the best sessions I’ve attended at a UKCCSRC biannual meeting so far, with a broad range of well-presented topics: post-combustion retrofits to CCGT (Mathieu Lucquiaud), rotating adsorbers (Enzo Mangano), fuel combustion properties for gas oxyfuel (Richard Marsh), ‘amphibian’ adsorbents in circulating fluidized beds (Colin Snape) and an evaluation of the physical properties of novel solvents  (Jiaifei Zhang). Since my colleague Abigail is covering the talks by our fellow Edinburghers (easily confused with Adam Berger as I found out at the dinner the previous night) Mathieu and Enzo, I’ll focus on the presentations by Richard, Colin and Jiafei. 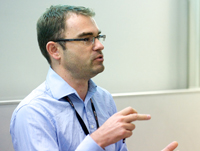 Richard Marsh’s talk ‘Gas turbine oxyfuel combustion in lean low-emissions swirl burners’ was particularly interesting,  as before meeting him in Cambridge 6 months ago, I hadn’t realised that gas oxyfuel was a serious contender in CCS. Richard’s work was mainly based around fundamental combustion property testing using methane burners and he came up with some results which looked useful, in spite of my ‘outsider’ perspective. It turned out that using enriched oxygen to burn the fuel had very little effect on the ‘Rich Operability Limit’ (I think this meant the minimum amount of gas needed to burn the fuel in a stable flame).  On the other hand, replacing nitrogen with CO2 helped to stabilise the flame, reducing the mass velocity of the burner. The implication of the work seemed to be that oxygen enrichment was futile, and merely added another hazard, while increasing CO2 did have significant implications for design – although exactly what those implications were was an issue for power plant engineers. There was also some strong evidence that CO2 can dissociate to form CO at high temperatures, although fortunately not enough to obsolete CO2 fire extinguishers – thanks to Muhammed Akram for highlighting how CCS research has the potential to inform the wider community.

As a former fluidized bed/pneumatic transport researcher, I felt a bit more at home with Colin Snape’s ‘An update on Gas CCS Project: effective adsorbents for establishing solids looping as a next generation NG PCC technology’. The circulating fluidized bed setup used to handle the adsorbent was certainly familiar territory. Earlier in the day I’d had a conversation with a colleague who was lamenting the failure of a lot of researchers to recognise the need to use adsorbents which were compatible with water – a well-known product of combustion…  It was a relief to see that the polyethylemimine- impregnated silica  adsorbent proposed by Colin actually worked better in the presence of moisture. The adsorption capacity of around 0.09 g CO­2/g solids for  5% CO2 at 50°C was encouraging, although as Stefano Brandani pointed out, it still meant using much bigger equipment than for a solvent plant. Although lab trials had suggested that degradation would be a problem, this seemed to have been solved during pilot testing. It will be interesting to see how this technology develops.

Jiafei Zhang’s ‘Selection of amine Solvents for CO2 capture from natural gas power plants’ focussed mainly on the physical properties of the amines. There was a lot of validation and some further development of correlations for density, viscosity, heat capacity and surface tension – for both loaded and unloaded amine – and Jiafei demonstrated sound experimental methods. Importantly, the implications of the physical properties on the process and the various trade-offs were considered. For example, lowering the viscosity means that you can lower the temperature and increase CO2 loading. Jiaifei suggested that careful control of physical properties and chemistry could almost halve the energy consumption for carbon capture compared with ‘traditional’ 30% monoethanolamine.

Overall, it was encouraging that all three of the presentations discussed technologies which either already worked or looked workable.

The question has definitely moved on from ‘Can we do CCS?’ to ‘What’s the best way to do CCS?’