Final report from Call 2 Project: The Development and Demonstration of Best Practice Guidelines for the Safe Start-up Injection of CO2 into Depleted Gas Fields

Written by Andrea Sacconi from University College London who is the Research Associate on the UKCCSRC Call 2 project – The Development and Demonstration of Best Practice Guidelines for the Safe Start-up Injection of CO2 into Depleted Gas Fields (PI: Haroun Mahgerefteh)

The UKCCSRC Call 2 project has focussed on the development and verification of a rigorous mathematical model for the simulation of the highly-transient multi-phase flow phenomena taking place in the wellbore during the start-up injection of CO2 into depleted gas fields. This model is intended to serve as a powerful tool for the development of optimal injection strategies and best-practice guidelines for the minimisation of the risks associated with the start-up injection of CO2 into such fields.

Highly-depleted gas fields represent prime potential targets for large-scale storage of captured CO2 emitted from industrial sources and fossil-fuel power plants. The most effective way of transporting the captured CO2 for subsequent sequestration using high-pressure pipelines is in the dense phase. The CO2 arriving at the injection well will typically be at pressure greater than 70 bar and at temperature between 4 and 8 ºC. Given the substantially lower pressure at the wellhead, the uncontrolled injection of CO2 will result in its rapid, quasi-adiabatic Joule-Thomson expansion leading to significant temperature drops. This could pose several risks, including hydrate and ice formation around the wellbore and thermal shocking of the wellbore casing steel, leading to its fracture and ultimately escape of CO2.

Despite its importance, the modelling of the flow dynamics taking place during the start-up injection of CO2 has been devoted mainly to either steady-state operations or flows where only pure CO2 is injected. In addition, there is little work in the literature regarding the impact of the injection rate and the upstream inlet conditions (e.g. temperature and pressure) on the degree of cooling along the well. Needless to say, the modelling of this flow is extremely complicated. Let us have a closer look at the homogeneous relaxation flow model we employed and the main results we would like to report.

As per usual in these projects with a direct engineering application, the modelling part has been accompanied by heavy simulations, through which we have managed to identify the most relevant parameters. Based on the application of our model to a realistic test case involving the injection of CO2 into the Goldeneye depleted reservoir in the North Sea, the main findings of this work can be summarised as follows:

Other parameters that are to be taken into consideration are: a site-specific outflow boundary condition (which can account for the properties, e.g. pressure, porosity, and permeability, of the particular reservoir into which the CO2 is discharged), a cross-sectional area varying with depth, and the heat conduction in the radial direction through the various well layers. 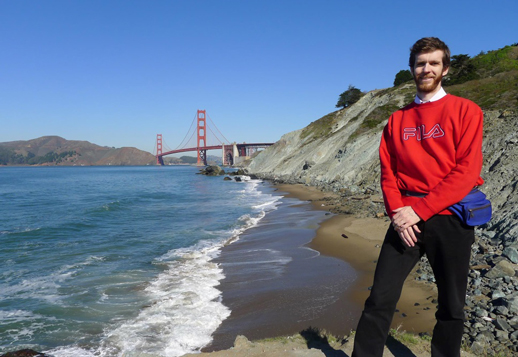 As part of the project I had the great opportunity to present my work at the 2016 AIChE Annual Meeting, held in San Francisco on 13-18 November 2016. Despite the ordeal to arrive in San Francisco (my connection to California was cancelled, I had to hop on a plane to Los Angeles and then on another one to reach my final destination … with my luggage misplaced in the meanwhile!), I made it on time for my presentation. I was lucky enough to find a warm, sunny day, ideal for some pictures. 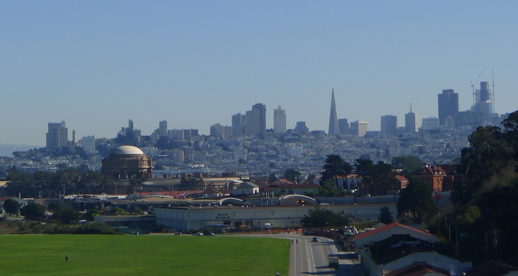 During the project, it has been an honour to work with bright researchers and PhD students, and to collaborate to the writing of new research proposals where the work carried out in this project will hopefully be developed. We aim to investigate the presence of impurities in the feed stream and the usage of a combined single-fluid/two-fluid model for an improved characterisation of flow regimes and interphase correlations. Moreover, the lessons learnt from this well injection project could be used in other modelling challenges, where the well is not filled with CO2 but with another gas (e.g. methane) and highly-transient operations might involve not the injection into a reservoir, but the sudden blowout of the well at its head, with accidental release of hazardous inventory into the surrounding area.