This project involved examining the potential for high temperature presintering of Ca-based sorbents for carbon capture and storage.  The reaction between CaO and CO2 (which is reversible) is an a promising method to remove CO2 from power stations and cement plants, producing a pure stream of CO2 for geological sequestration. It has attracted significant attention since it causes a  relatively small efficiency penalty when used for post-combustion CO2 capture from a power station (estimated at 6 – 8 percentage points).  The fact that it can be potentially used in mature large-scale circulating fluidised beds and the very cheap cost of CaO (which can be produced simply by heating up limestone) mitigate for its development.  However, one issue with the use of sorbents derived from limestone is that the sorbents deactivate (lose their ability to take up CO2) rapidly over multiple cycles.  A number of methods have been used to reduce this deactivation, such as doping the sorbent (impregnating it with a solution of a salt such as HBr) – but doping is potentially challenging as a sorbent activation technology because it may lead to emissions of corrosive materials (generally halides) in the boiler.

Our work investigated a promising alternative treatment, preactivation via heating (we heat the sample up in a furnace for several hours to change the structure of the material), to see if this gave the same extent of activation as halide doping.  We tested the ability of the sorbent to take up CO2 by measuring the weight change as we repeatedly cycled the sorbent between an atmosphere where CO2 would absorb on to the solid and when CO2 would desorb from it on a very sensitive balance with the ability to vary the temperature and concentration of CO2 passing over the sample.

Our aim was to increase the ability of the CaO to take up CO2 over a large number of cycles.  Whilst a number of different treatment  methodologies led to the samples gaining CO2 capture ability over a period of time, overall the technique did not lead to sufficient advances over doping techniques to supplant them as the most likely technology to be applied in practice, because it didn’t lead to a sufficiently significant increase in the long-term reactivity.  The work was conducted by Dr Zili Zhang and Dr P.S. Fennell, who were supported by Liem Bui-Li and Jana Tian (project students). 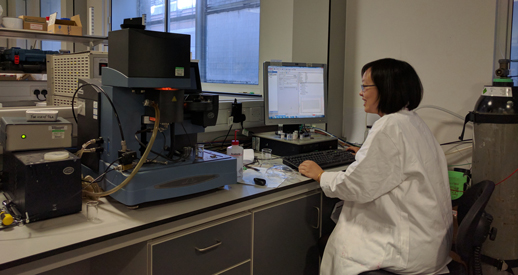 This strategy does not appear to be hugely promising – a large number of combinations of e.g. pretreatment temperature and duration were investigated, including their combination with doping in certain cases, but nothing gave results which would justify the use of this technology commercially; it appears that the initial promise of the technique was owing to very long reaction times used in the laboratories initially proposing it.  We will therefore continue to focus the work in the Fennell laboratory on the integration of Ca-looping with cement manufacture, a process where the long-term reactivity of the sorbent is not so important.