The Flexible CCS Network Development (FleCCSnet) project ran from October 2013  and finished at the end of August 2015 with the final report submitted in February 2016. It was funded through the UKCCSRC’s Call 1 for research projects. It brought together seven academics from Newcastle University, The University of Strathclyde and The University of Edinburgh. The aim of the project was to carry out research to enable the production of design and operating guidelines for Carbon Capture and Storage (CCS) pipeline networks in order that these networks can react effectively to short, medium and long term variations in the availability and flow of carbon dioxide (CO2) from capture plants and also to the constraints imposed on the system by the ability (or otherwise) of CO2 storage facilities to accept variable flow. Figure 1 shows a schematic representation of the scenarios considered in the project. 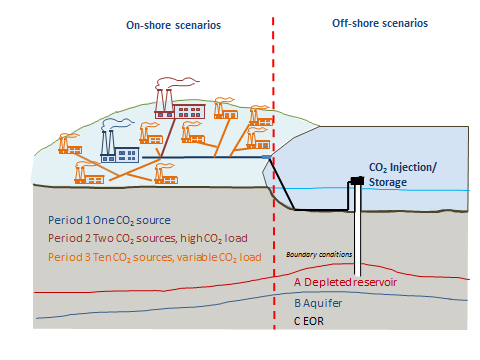 The amount of CO2 captured at a power station is expected to become more variable in the future as the electricity grid brings in more and more intermittent renewable energy (meaning a conventional power station is temporarily not needed or in reduced operation as the renewable energy takes precedent). The storage site will also face periods of maintenance which will impose constraints on the flow into the store and it is also important to look at the case of upset conditions in order to be able to predict any potential problems. Solutions to these all these issues need to be factored into the design of the CCS network, the focus of the project was to identify the issues surrounding flexibility and explore some of them.

To ensure industrial relevance and rapid and effective dissemination to relevant stakeholders, two workshops were held during the duration of the project, the first in Edinburgh on 30 April 2014 and the second in Newcastle on 22 April 2015. The workshops, not only influenced the direction of the research, but also engaged with industry stakeholders so that they could take ownership of the results of the project and incorporate the results into company practices for modelling of CCS systems. Workshop notes and scenarios identified were distributed to attendees and are freely available on the project’s page on the UKCCSRC website. There was a total of 44 attendees (half were industrialists) and, as well as highlighting the key issues to be explored,  the industrialists also provided information on a storage site, a typical power plant operating cycle and costs for infrastructure for use by the project team.

In particular, the project has looked at the potential flexibility that a capture plant has, about how not knowing fully about the storage site can affect the pipeline in terms of its operating ability and answered the question about how much flexibility a pipeline holds in terms of its ability to temporarily store CO2. There are plans to publish guidelines on best practise for the design and best practise of flexible and plausible CO2 transport networks. This will allow the networks to have the ability to react to changes in the flowrate of CO2 across the whole CCS chain, allowing network designers to anticipate potential problems associated with the operation of the pipeline network.

The guidelines produced by this project will allow CO2 pipeline designers, CO2 network operators, electricity utilities, CO2 storage providers, and national regulators to make informed decisions about options for design and operation of CCS projects in both the short and longer term. Our results allow initial source‐to‐sink projects to be able to form part of a national or regional cluster network with adequate interim storage of CO2 and inform the deployment of CCS at a national level and the project’s storage model can be used to screen storage fields based upon the pipeline’s ability to be able to take up storage limitations.The guidelines will be published later this year (2016) so look out for news about them in the UKCCSRC newsletter and we hope to present them to you at a future biannual meeting!