My visit to the Aquistore CO2 injection site in Saskatchewan, Canada has not only illustrated how Carbon Capture and Storage (CCS) can work in practice, it also reinforced the question: Why aren’t we doing this in the UK yet?

I arrived in Ottawa just as the last snow had melted (phew!). My April-May 2015 trip, funded by the UKCCSRC International Research Collaboration Fund, had two aims. The first was to learn about how the Aquistore CO2 injection project works in practice. The second was to make contacts with those in Canada with first hand experience of CCS projects to allow the exchange of ideas and experiences. Dr. Don White at the Geological Survey of Canada (GSC) hosted my visit. I have been working with Don on the surface passive seismic data recorded at the Aquistore CO2 injection project and this trip was an excellent opportunity to gain a more in-depth understanding of the project. My research focuses on passive seismic interpretation and methods which means I work with the recordings of any seismic events induced by CO2 injection. Surface seismometers or surface or downhole geophones are deployed to detect this seismicity.

The GSC staff I met work on a wide variety of projects. Of particular interest to me was the group’s research into using seismic noise recordings to produce seismic reflection images and also their work on induced seismicity. Induced seismicity (earthquakes induced by human activity) has recently become a topic of significant interest with Oklahoma now having more earthquake sequences with magnitudes >3 than California. In Canada the focus is on hydraulic fracturing in British Columbia and Alberta where two magnitude ~4 earthquakes have recently been attributed to hydraulic fracturing activities. This desire to understand induced seismicity is one that I share.

The CO2 injection at Aquistore only began in April so it was an exciting time to be around. I was keen to see the site, partly because I’d never visited any similar industrial site and partly because I wanted to see the instruments my research relies on. The site is near Estevan, which is not quite the middle of nowhere, but it’s not too far away. The instructions to drive there from Regina (the capital of Saskatchewan) are: Drive 140km in a straight line across flat, empty prairie, at the end of the road turn right. After 60km you have reached you destination.

Aquistore hosts an impressive array of geophysical and geochemical monitoring techniques including 3D seismic, passive seismics, Interferometric Satellite Aperture Radar (InSAR) monuments and ground water testing wells. Kyle Worth and Afton Leniuk from PTRC, who manage the site, kindly showed me around. I’m not sure what I was expecting but the site is small and tidy. It consists of an injection well, an observation well and some temporary buildings for experiments and instrumentation.

Also on site were Georgios Yfantis from the University of Strathclyde and Prof. Doug Schmitt and Randy Kofman from University of Alberta. I visited Georgios’ seismic experiment and, since he’d been living in this not-quite-the-middle-of-nowhere town for over a month, he showed me all the Estevan highlights. It only took a couple of minutes. Doug was deploying geophones in the observation well and this was the point where I discovered how practice takes over from theory.

To winch the geophones into the observation well required several hours, some getting stuck and a little bit of swearing. Eventually the geophones reached their destination 2900m below the surface (the Aquistore injection is at >3km deep). The next day these geophones needed to be winched the 2900m out of the borehole. Unfortunately the weather had turned from bright sunshine to near-freezing rain with a strong wind. By the time the geophones reached 2800m we were all soaked and cold. At 2700m Georgios and I made ourselves useful and warmer by heading offsite to pick up coffee and doughnuts. The depth meter read 1700m when we returned. At 1600m we were wet and cold again. I don’t know how Doug and Randy kept going (photo). The winch kept sticking and would need rewinding a few metres before starting up again. Finally, 100m to go! 80m… Stop. No! The motor for the winch had given up. Doug and Randy set off to town on an emergency hairdryer-buying-trip – there was probably water in the motor. In the end the crane hired specifically for the job pulled the geophones free of the well, 8 hours after we started. Thank goodness the hair dryer wasn’t needed, it would have been a bit like using one in the shower. 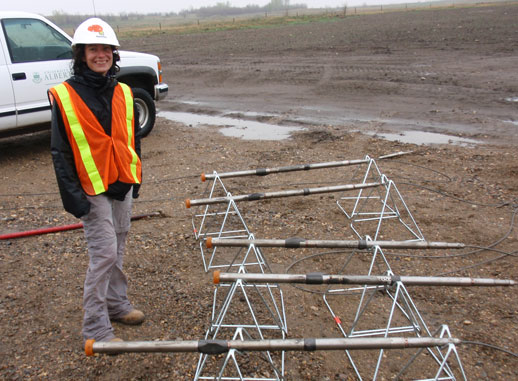 The muddy, greasy geophones appeared one by one from the depths. Happy for their safe return, but with numb hands, we cleaned them. The rain kept falling. Exhausted and cold we packed up the University of Alberta equipment. Sliding our cars through the Glastonbury-esque mud pond that the site had become, we made our weary way to warm accommodation. You cannot get this kind of learning experience in the UK where we are still talking about CCS as a future solution to reducing CO2 emission rather than a current solution. We will not know some of the difficulties involved until we try it in practice and, until we implement a large-scale project, some of the technologies and techniques will only be theoretical.

The next day I headed back to Regina (after 60km turn left, drive for another 140km until you reach Regina) to start another mini-adventure, a visit to the Carbon Management Canada’s Field Research Station (FRS) in Alberta. This site will be a test site for monitoring technologies for CO2 leakage from a CCS project. Next January CO2 injection will begin in shallow boreholes and many experiments will be deployed to detect this CO2. Prof. Don Lawton was a welcoming and generous host and I helped out deploying surface geophones for a seismic survey (see below). Also while I was there Prof. Dave Eaton’s group from the University of Calgary was deploying a downhole geophone array to record a vertical seismic profile (VSP) using a vibroseis truck.

The visit to the two sites was a fantastic experience. I now have a much better understanding of the practicalities and challenges involved in downhole and surface seismic experiments. I hope that I will be able to apply my knowledge in the UK one day. Overall my trip to Canada has provided me with much useful information and discussions. I have made new contacts and gained inspiration for future projects. I thank the UKCCSRC for giving me such an opportunity and Don White for hosting me at the GSC.