We’re pleased to share a blog report below from Stavros Michailos, Mohammed S. Ismail and Lin Ma of Energy 2050 at the University of Sheffield, on Lin’s Flexible Funding 2020 project, Evaluation of different CCUS systems based on the MCFC technology for decarbonising the power generation sector:

Carbon capture utilisation and storage (CCUS) is pivotal for delivering net-zero GHG emissions and strategically significant to the UK economy. The study details the performance of three CCUS systems based on MCFC via multiscale modelling, i.e. multiphysics modelling of the MCFC unit and process modelling. A distinct advantage of the MCFC over other CO2 capture technologies is that, instead of absorbing energy (electricity), it generates it. Mass and energy balances have been established in COMSOL Multiphysics® and Aspen Plus software. Based on the simulations, a levelised cost analysis has been undertaken to appraise the capture cost of the investigated technologies. The MCFC concentrates CO2 that can be stored or further utilised. Figure 1 is a visual representation of the scenarios examined in the study by means of simplified block flow diagrams (BFD). 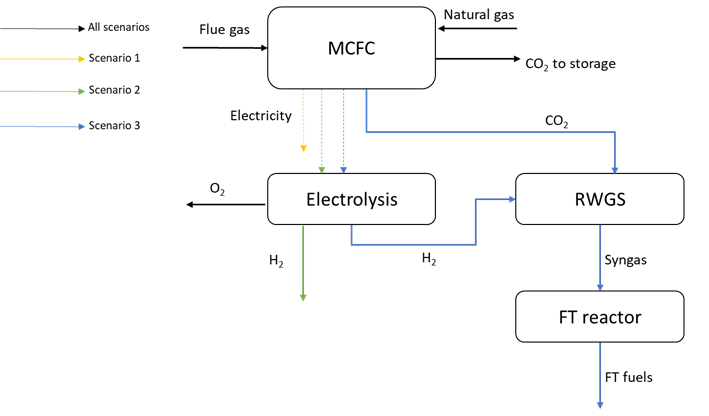 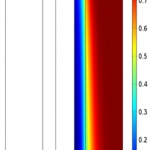 Figure 2 b. concentration of CO2 mol m3 in the cathode channel at 0.7 V 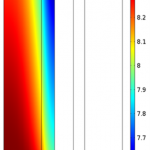 Figure 2 c. concentration of H2 mol/m3 in the cathode channel at 0.7 V

Figure 3 shows that the cell voltage and power density increase with increasing current density after 3500 A/m² (Figure 3(a-b)); this is attributed to the availability of amount of CO2 that is higher than that what is needed for the half reaction at the anode electrode. However, before 3500 A/m², the fuel cell performance appears to slightly improve with decreasing CO2 concentration; this seems to be due to availability of amount of oxygen that is substantially higher than what is needed to complete the half reaction at the cathode electrode. Evidently, the carbon capture factor, which is the ratio between the flow rate of CO2 concentrated at the anode and the flow rate of CO2 available in the flue gas, substantially decreases with increasing CO2 concentration in the flue gas. 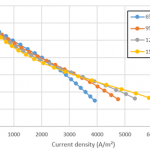 Figure 3 a. Impact of CO2 concentration in flue gas on fuel cell voltage 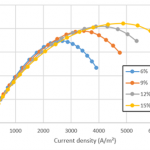 Figure 3 b. Impact of CO2 concentration in flue gas on power density 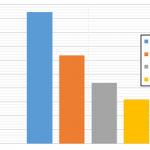 Aspen Plus has been utilised to model the electrolyser and the Fischer-Tropsch (FT) plant. In particular, for the FT plant, CO2 and H2 are fed to a reverse water gas shift reactor to convert CO2 to CO. The produced syngas is sent to the FT reactor, which generates a mixture of light gases, syncrude oil and water. After proper separation a part of the unreacted gases and light hydrocarbons are sent to a CHP unit modelled as combined cycle turbine and the rest is recycled to the FT reactor. The syncrude oil is fractionated to naphtha, kerosene and diesel cuts. The CO2 that is not utilised is sent for compression and permanent storage. Figure 4 presents the basic mass balances of the Scenarios 2 and 3.

Prof Yong Yan, University of Kent, shares his report blog as an output from his project report for Monitoring of
Read More