Written by Toluleke Akinola and Anthony Orji (both University of Hull) who attended the ECR Winter School 2016 in Sheffield, 15-18 February 2016, with funding from the UKCCSRC ECR Meeting Fund. 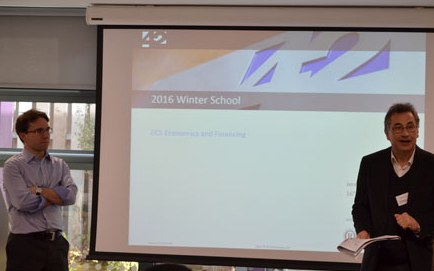 The first guest speaker was Jeremy Carey, Managing Director of 42 Technology Limited, who spoke on “CCS Economics and Financing”. He explained the rationale behind economic decisions with respect to funding of CCS projects in the UK. The speaker gave an insight into why and how the UK government failed in investing in CCS following the recent decision to cancel £1bn funding for the carbon capture and storage commercialisation competition. He evaluated the UK government financial investment decision criteria, examining a simplified economic model under various cases. He also evaluated the economic implications of the Energy Act of 2013 and Feed in Tariff Contract for Difference (FiT CfD) using a simplified economic model under various scenarios and ended by giving some suggestions on what can done by the government to encourage investment in CCS.

The second speaker, Prof Jon Gluyas from the Department of Earth Sciences at Durham University, spoke on CO2 storage and monitoring. After giving an overview of CO2 storage in the UK, he went on to discuss a novel muon tomography monitoring technology that is been developed. He stated the challenges involved in deploying this novel technology and where else this technology could be adopted.

The third speaker, Mathew Billson, Energy 2050 Programme Director at the University of Sheffield, delivered a topic on UK energy market, policy and regulation. He started by giving a historical overview of government intervention in the energy industry to date. He was of the opinion that more government intervention was needed at this crucial period as the sector transitions from a fossil-based to renewable energy-based sector. This intervention he said would be in the form of financial guarantee to the often novel technologies that will be deployed to achieve the decarbonisation of electricity generation within the next decade. He faulted the decision to cut funding for carbon capture storage project as CCS technology is a key component of the portfolio of technologies to be deployed to meet the global climate targets set for 2050. 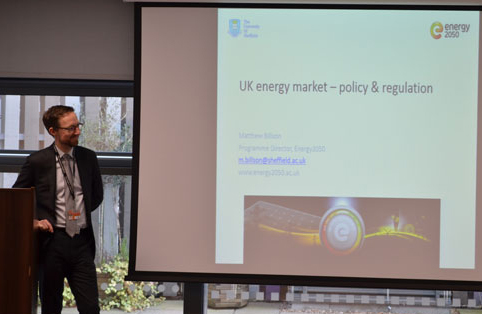 He also talked on current legislation governing the energy sector – the Energy Act of 2013, which he said was the biggest change to the UK energy market since the 1980s. The highlight of the legislation is the Feed in Tariff Contract for Difference (FiT CfD) mechanism which is a financial instrument to guarantee a fixed (reference) price for energy generators. This the government hopes would increase the certainty of investment return to companies, aid substantial investment within the sector by 2020, stimulate competition and drive down the cost of clean energy.