On the afternoon of the second day, the individual student talks on research started. The first speaker was Sarah Angel-Smith from Nottingham University whose presentation was on the characterisation of diesel deposits using advanced analytical methods. Next, Christopher Bridge talks on Biomass Co-firing to improve the burn-out of unreactive coals in pulverised fuel combustion. Patrick Daley presented on the Bringing ash fussion analysis into the 21st century. Also, Hayden Morgan shed more light on how oxygen concentration during CO2 injection affects microbial activity in geological storage site.

After the oral presentations, the interactive group work part at the Winter School started. Philip Sharman (Evenlode Associates) as the inspiring chair of the activity kicked off the session with a short briefing. Having over two decades of experience in industry he explained that often situations occur that require spontaneous public appearance in terms of presentations or the chairing of meetings and conferences without allowing for much preparation time. He elaborated about the importance of carrying out these tasks appropriately for helping out friends and colleagues, or merely in the business context, while simultaneously boosting your own profile and network. Consequently, in order to improve our practical skills, the task of the group work was to present in small groups of around 4-5 people about a CCS related topic in the final presentation session of the Winter School two days later on the Thursday morning. Ten minutes were allocated per group followed by further ten minutes for responding to questions of the panel and the floor. A limit of two Power Point slides was set. The slide limit was set to avoid excessive preparation of the groups at night and outside the scheduled group work time. The limit was set in fact to protect the participants from overshooting and to maintain the character of the Winter School as a fun an enjoyable seminar week which, without doubt, has succeeded also this year. The panel consisted of chairs Philip Sharman and Rosemary Whitbread (HSL) and 3rd year EngD students Sarah Angel-Smith, Christopher Bridge and Scott Russel, all of which were available for helping out the groups throughout the two days, with their different areas of expertise. Further expert contacts were provided to the individual groups dependent on the topic they worked on.

In the first stage of the activity Philip asked the 5 preassigned groups to prioritise the preferred topics from a list of 12 options. Given the wide variety of topics and the large scope of the options the 15 minutes scheduled by Philip were generally found to be pretty ambitious.

Once the groups had prioritised their topics of interest a drawing system was used to decide which groups could pick their topic first. Group A including Patrick Daley, David Walker, Haesul Fagcang and Toluleke Akinola got most lucky in their draw allowing them to pick the most popular topic about ‘energy storage and its use at fossil fuel power plants’. Group C, later also known as The Globally Radical Organisation Utilising People’s CO2 or in short GROUPC, including Hayden Morgan, Jamie Pulsford, Diarmaid Clery, Ruta Karolyte and Thomas Spitz shortly after decided to work on CCU (Carbon Capture and Utilisation). Charles Dyson, Lawrence Coghlan, Christopher Wiseall and Mohammed Aminu in group B selected to work on the options and potential of geological storage of gases. David Nichols, Genevieve Hodgings, Joseph Perkins and Anthony Orji chose the potential of industrial CCS as their topic of particular interest. And finally, last but not least, group E with Liam Reddy, Robert Stirling, Oluwaseun Olowejebutu, Kazeem Rabiu and Mathias Schnellmann decided to research about hybrid energy systems consisting of power generation from fossil fuels as well as from renewable sources. They did so under their innovative nickname ‘HfD – Hybrids for Difference’.

Having assigned a topic for investigation to all groups Philip gave the starting signal for the group work. The groups distributed across the several meeting and conference rooms in the well suited Inox Dine center at Sheffield University. Intense discussions soon developed in all corners of the working area and with the first hours passing by quickly it became clear that the scheduled group working time was in fact not much and things had to be organised efficiently. For this to happen, groups came up with different strategies. Some divided up the projects in different parts and assigned them to individual group members. Some groups made use of the available experts and the particularly broad and detailed knowledge of the chairs Philip and Rosemary to save time filtering out the relevant information from the web. Others made use of some additional time and organised group meetings also in the evenings or even during dinner. Again others woke up early on Thursday morning to give their presentation the final touch. In general, however, due to the very interesting topics, the group work was widely and intensely debated throughout the last days of the Winter School be it on the bus to the massive Drax power plant or while having drinks at the bar in the evenings. This fostered the learnings of the participants in a very relaxed and open environment.

The different work strategies of the individual groups were also reflected in the way the groups presented their gained knowledge. While groups B, C and E organised their presentations in a traditional way with short talks by all individual group members, group A showcased their work by imitating an early morning radio broadcast interviewing of an experts and a politicians. Group D took the approach of a round table, with an environmentalist, a CCS lobbyist, a scientist and a chair discussing the topic of industrial CCS. 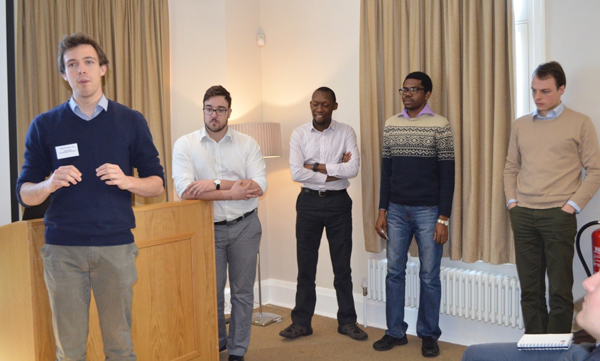 Following the presentations the speakers were challenged by questions of the panel and a very curious floor, that would have probably never stopped asking if chair of the presentation session and 3rd year EngD student Daniel Neumann would not have been good with the timekeeping, even if it was his first appearance in this role.

The tension rose again shortly before the awards ceremony. The honour and prize for the best presentation finally went to Charles Dyson, Lawrence Coghlan, Christopher Wiseall and Mohammed Aminu in group B. The prize in the category ‘most innovative group name’ went to Hayden Morgan, Jamie Pulsford, Diarmaid Clery and Ruta Karolyte in group C for the name The Globally Radical Organisation Utilising People’s CO2, or in short GROUPC.

Nevertheless, we at this point would like to thank all participants and organisers for making the Winter School a truly enjoyable and rewarding event both in terms of gained knowledge and skills as well as new, interesting and relevant contacts. A big thanks also to the UKCCSRC for the funding they made available to the Winter School and the participants. 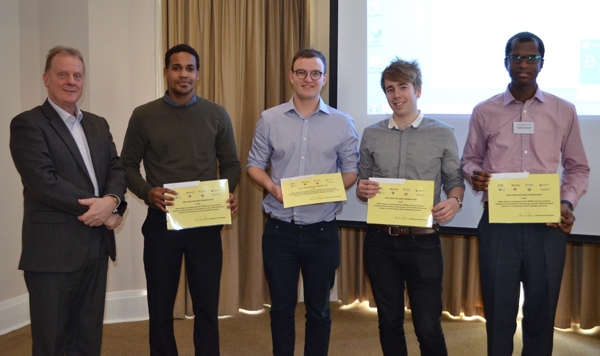