Written by Diarmaid Clery (University of Leeds) and Ruta Karolyte (University of Edinburgh) who attended the ECR Winter School 2016 in Sheffield, 15-18 February 2016 with funding from the UKCCSRC ECR Meeting Fund

Prof Colin Snape opened the Winter School greeting the students and we started exploring the current technical, legal and economic issues of CCS lead by a great selection of speakers.

Prof Jim Watson started the first day of the school with a very interesting talk on UK energy policy and CCS. The recent government decision to remove funding for a full scale CCS project was a point of discussion many times that day. One of the reasons the government offered to justify the funding withdrawal was a high power generation cost in the proposed CCS plant compared to alternatives such as onshore wind or nuclear.

Watson pointed out that we currently don’t know the true costs of CCS as it hasn’t been deployed yet. The costs of the first demonstration plant might be high compared to conventional gas or renewable energy plants, but these costs fall with increasing deployment. This effect is completely expected and has been observed in the development of many other technologies such as onshore wind, shale gas and many others. Comparing the price of electricity from a CCS plant to that from developed technologies is simply not fair and misleading. 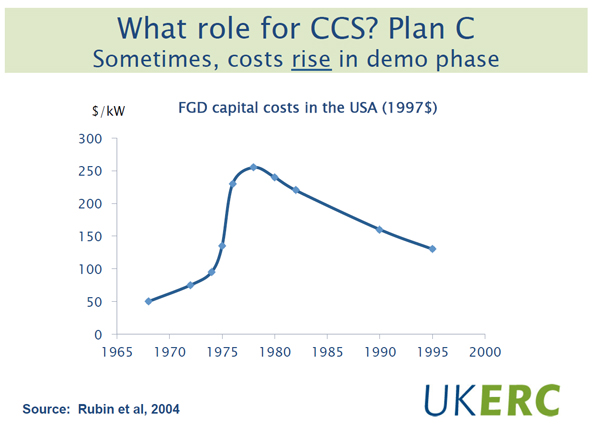 UK government’s current stance on CCS in unclear: ‘buying’ CCS technologies from other countries in the future is more complex than it sounds, firstly because CCS is very location specific and, more importantly, because many other countries’ demonstration plans are also slow. Who will take the initiative to lead the global progress? At this point in time we urgently need a new robust strategy for CCS in the UK.

Prof Jon Gibbins was second to speak on the first day of the Winter School 2016. He presented a combination of lectures on the capture of carbon dioxide from a point source. He started by talking us through the importance of CCS in the UK’s effort’s to meet EU emission targets and introduced us to the wide variety of existing CCS technologies available. The variety of important financial, political, environmental, safety, regulatory and social considerations were also highlighted for these technologies.

An overview of the CCS process was given along with a summary of the status of CCS worldwide and some example sites including Boundary Dam, Peterhead and the amine capture plant at the UKCCSRC Pilot-scale Advanced Capture Technology (PACT) facilities. The Boundary Dam project is the first CCS power station in the world with a post-combustion CO2 capture plant. The recent removal of funding by the UK government for the White Rose Project in Selby was also discussed which implications of the delay in technological advancements.

Prof Gibbins went on to explain some of the difficulties facing the implementation of CCS such as additional costs of power generation and the feasibility of carbon dioxide transport networks. Practicalities such as corrosion and system design were also identified along with an overview of Gas Turbine technologies given towards the end of the talk. To finish, Gibbins gave an overview of how far CCS has to go in terms of implementation and how our research as ECR’s fits into that.

Prof Myles Allen finished the day by highlighting the role of CCS in climate change mitigation and presenting a funding model for its development.

The Paris agreement to limit warming below 1.5°C means that, in practice, the global leaders have agreed to a fixed amount of carbon to be released into the atmosphere and a transition to net zero or even negative emissions in the future. To achieve this goal, we must focus on the technologies can bring the rate of emissions to zero. This means that CCS is the single most important technology we can use to achieve this goal, as all the other decarbonizing measures merely decrease the amount of CO2 emitted but do not bring it to zero.

Allen regards carbon tax as one of the measures which would reduce CO2 emissions in the short term but would not solve the problem. Penalizing carbon emissions does not stop the gas from reaching the atmosphere. An alternative way to finance CCS is legislation for mandatory carbon sequestration: fossil fuel companies would be committed to sequester a certain amount of carbon depending on how much CO2 they released. The fraction of carbon required to sequester would increase with time, allowing companies to develop the most efficient and cost effective technologies to do so.

Such policy might sound drastic, but in fact it would be the most straight forward way to address the problem directly. If the world leaders are willing to commit to ambitious goals on paper, they should show willingness to take drastic measures in practice too.

It’s fair to say there was something new to learn for everyone during the first day, as many of the issues brought up by the speakers were eagerly discussed at the dinner tables long after the talks were finished.