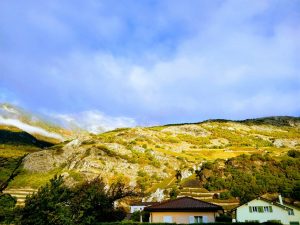 I am a PhD researcher at Cranfield University, UK. I spent three months at Industrial Process and Energy Systems Engineering (IPESE), École polytechnique fédérale de Lausanne (EPFL), Switzerland. The purpose of the visit was to learn the IPESE in-house process synthesis software called OSMOSE and apply the tool to identify the optimal process configuration for a coal-fired power plant integrated with a supercritical carbon dioxide (sCO2) cycle. I stayed in Magnot, which is about 8 kms away from the EPFL campus at Sion, Switzerland. Stunning hills, apple and grapes surround my accommodation. 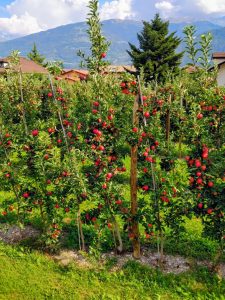 I gave a presentation to Prof. François Maréchal and Dr. Ligang Wang about my works at Cranfield, UK and discussed about the way forward. I accessed OSMOSE with the documents available. OSMOSE was written in the Lua programming language which generates the input file to the optimising program. It is a bi-level optimiser where the top-level genetic algorithm handles the non-linear variables and the lower level handles the mixed-integer linear programing solver typically linked to the commercially available tools such as AMPLE software. Therefore, the Lua programme organises the input data, prepares the input file to the optimiser, and collects the results. Although I knew programming (typically in MATLAB and FORTRAN), Lua language was new to me. Moreover, this is a table-based object-oriented language and it took some time to start understanding the codes. I was given some examples that model the conventional power plant in OSMOSE to start to build my problem from there.

After learning the basic working principles of OSMOSE , I realised that I couldn’t apply the conventional modelling approach to sCO2 cycles directly, instead I needed to change the source code itself considering the below points:

In order to understand the procedure to systematically add/remove process components, the current sCO2 cycles needs to be compared in a systematic way. Numerous cycles have been proposed in the literature (>42) and there is no systematic comparison has been done. Therefore, this turns out to be the prerequisite to start adapting the OSMOSE tool. Once this is agreed, a few potential sCO2 cycles have been compared in a systematic way and a MATLAB code was developed in order to facilitate this task.  However, a few more cycles need to be studied and I will continue doing that being at Cranfield with the remote support from IPESE. We aim to summarise this work as a paper.

It’s been a good week for blogs from our Flexible Funding investigators! We’re really happy to share our second blog
Read More

We’re pleased to share the blog report as an output of ‘Advancements in mixed amine atmospheric kinetic models‘, one of
Read More