This blog was written by Clara Heuberger, a PhD student at Imperial College London, who received funding to attend the Manchester Biannual Meeting from the UKCCSRC ECR Meeting Fund

The closing panel discussion at the biannual UKCCSRC meeting was maybe the most bold and open-minded discussion on the various aspects of CCS development and deployment I have attended so far. The panelists discussion Jon Gibbins, Kevin Anderson, Philip Curry, Eric Ling, and Will Lochhead ranged from topics such as cross-chain and storage risk to life cycle costs, the government’s role to public engagement. Eric Ling from the Committee on Climate Change (CCC) says in order to ease the transition to a low-carbon energy system we need to make use of electricity interconnectors, energy storage technologies, as well as an increased flexibility provided by power plants operating within the energy system. This is the role CCS which will become particularly valuable. Unfortunately, there still seems to be some misperception and a rather antiquated 20th century perspective on the energy system and the position of power plants as base-load or peaking units present among some panelists. Kevin Anderson, however, makes the point that CCS power plants are not an approach to substitute and decarbonise typical base-load power generation. “The future is not the past”. he says. It becomes clear, we have to look forward and understand and value the additional features CCS power generation as a firm, flexible, and low-carbon technology can add to the energy system. 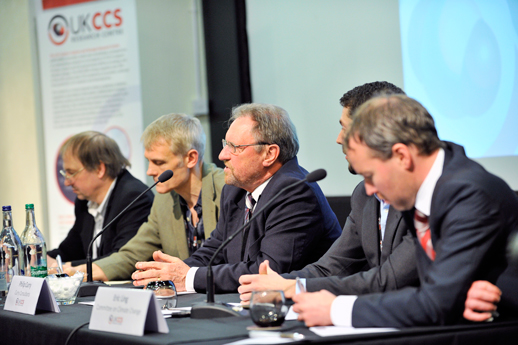 The audience and most panelists seem to agree that governments so far appeared to ultimately not be willing to take real action in order to mitigate climate change. The environmental drivers, devastating enough, might not lay within the politicians time horizon. Can we afford to wait any longer? Voices from the audience suggest: At least one of the lesson learned from our past experience should be: It might be a good idea not to cancel fully planned and engineered CCS projects at the last moment.