This blog was written by Dr Karen Finney, Research Fellow at the University of Sheffield, who received funding to attend the Manchester Biannual Meeting from the UKCCSRC ECR Meeting Fund

The discussion panel – the finale in a series of varied sessions at the Spring 2016 biannual – focused on how we are and can move CCS forward in the UK; especially in light of the government announcements last November, as well as the Paris COP-21 conference at the end of last year and the latest IPCC carbon budgets. Professor Kevin Anderson, a professor of energy and climate change at the University of Manchester and the deputy director of the Tyndall Centre for Climate Change Research, was on the panel.

With the cancellation of DECC’s CCS commercialisation project(s) at the end of last year, and after several other non-starters in the UK CCS sector, this implies a lack of credibility for the technology. Moreover, Prof Anderson believes that the “government don’t give a damn about climate change”. New power stations go unabated and are not CCS-ready – a 20th Century way on thinking in a 21st Century world. There is also a mismatch between behaviour and the message given out. We are advocating a 1.5-2 °C temperature change, although our actions are more geared towards a 5-6 °C change; and furthermore, we are not telling the rest of the world the reality of the situation.

A key point made by Prof Anderson was that whilst CCS is only done for the purpose of mitigating climate change, it is still, at best, just a ‘low-ish’ carbon option. He advocates that although carbon capture technologies can have a significant role in a true low-carbon future globally, their application is limited to a number of specific options – and energy generation from fossil fuels in Annex 1 countries (i.e. developed nations) is not one of them.

So what applications does he see then for CCS? Here in the UK, Prof Anderson has the view that CCS should only really be an option to minimise industrial emissions of CO2 (such as from steel and cement manufacture) and not for lowering emissions from power generation. What is the long term future for CCS when the reality is that it is not a comparative technology to other true ‘zero’ carbon options, like nuclear and renewables, when whole systems life cycle assessments are considered? When considering the ‘well to wire’ carbon intensity of power generation from fossil fuels, CCS can potentially make these numbers low, but not anywhere near close to zero. Apart from the mitigation of industrial CO2 emissions, which could be used universally, developing countries should now be using CCS.  He sums up by stating that it is the other parts of the world, which are developing their fossil fuel power capabilities, that need the CCS expertise that we have here – and they need to learn from those who have more ability for CCS research and development to aid their deployment. Industry and countries continuing to develop their energy infrastructure should be the focus areas of where CCS is applied. 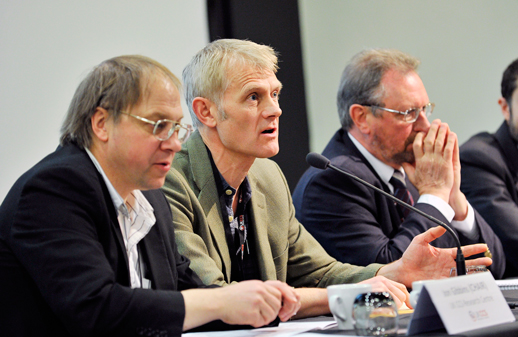 In the medium- to long-term it would seem that Prof Anderson agrees with the theory that CCS is firstly an important pathway to enable low-carbon industry developments and secondly is a vital bridging technology for low-carbon energy, but just not for us.