The Autumn Biannual Meeting of the UKCCS Research Centre held on 8 – 9 September, 2015 at The Technology and Innovation Centre, University of Strathclyde, Glasgow and the theme of the meeting was “CCS in the UK – Taking Stock”. The 1st day started with optional tour to the CCS facilities at Doosan Babcock, Renfrew. Following this were series of brilliant presentations and discussions covering new projects and issues of CO2 storage. At the end of the day, the fabulous three course dinner was served at The Corinthian in the heart of the city centre of the Glasgow. The dinner was delicious and the venue was fantabulous as shown in the picture. During the dinner, everyone had to swap the tables a couple of time to enhance the networking and getting introduced with one another.

During the dinner, Tony Espie was thanked and presented with quaich by the director of UKCCSRC, Prof Jon Gibbins for his services to the UKCCSRC board. Tony is an advisor on CO2 storage for BP Alternative Energy at Sunbury, UK. He is involved in managing the technology development programme on the performance prediction for storage systems. He is also the board member of the independent advisory board of the UKCCSRC. Later, Tony thanked the UKCCSRC and the audience and shared his views. 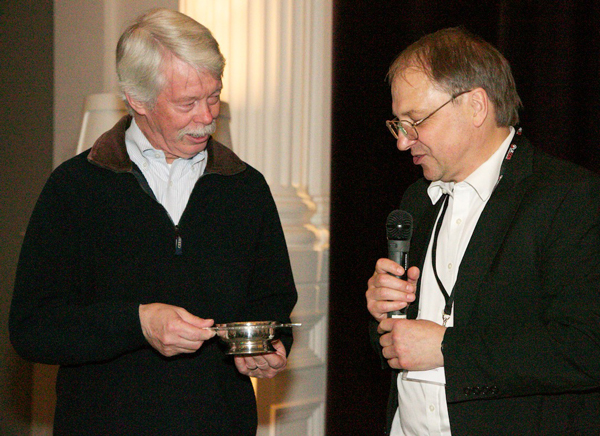 Later, the after dinner speech was delivered by Tania Constable, the CEO of CO2CRC and a Senior Fellow of the University of Melbourne. She had an extensive career history and most recently in 2013, she was recognised with an Australia Day Meritorious Award Public Service Medal for splendid public service in the development of Australia’s liquefied natural gas and other resource and energy industry.

In a witty way, she narrated the history from politics to showbiz and of course also on CCS. Ten years ago, The Lord of the Rings: The Return of the King was released, in parallel, the CO2 emissions reach 350 ppm. In 2003, carbon sequestration legislation was signed by the thirteen countries and the European Union. Along the way, in 2005 IPCC released report on carbon capture and storage and today it shows how far we had move in CCS. And now twenty two countries have signed the carbon sequestration legislation.

In 2003, a partnership was formed in Australia between industry, academia and government, and the aim of the partnership was to fully utilize the advance technologies to reduce the greenhouse gas emissions. The 500 million programme was initiated in 2005, for large scale demonstration for CO2 abatement including CCS. Among these, 60 million was allocated for the Golden project in CCS. Acknowledging the change of the market condition in age of emerging economies, the Australia extends partnership with China between 2007 and 2008.

She figured out various projects done regarding CCS including; oxy-fuel plant, combined cycle gasification plant, syn-gas underground oxygen injection gasification plant. For example, the Gorgon project and Callide Oxyfuel project can demonstrate their technologies to the world in the field of carbon capture and storage. The golden project coming online in 2016, will be opportunity to significantly reduce emissions by underground injection of CO2.

At the closing remarks, she stated a need is to popularise the work done on CCS. She referenced the famous Glaswegian phrase, “People Make Glasgow”, to fit it to the CCS community by saying “People Make CCS”. 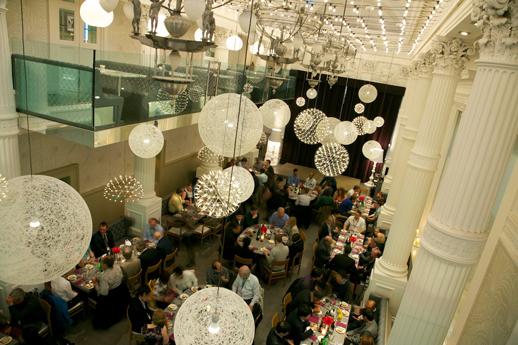 After her talk, delicious dessert was served to the participants of the magnificent dinner. At the end, I would like to thanks the UKCCSRC for providing me the ECR funds to attend the Biannual meeting and giving me the opportunity to meet the other people working on CCS and getting informed about its advancements.