The day after the night before. We awoke weary eyed and bursting at the waists after the grand banquet in Clare College the previous evening. With Coffee and pastries on the go, not even the rain could put a downer on the first session of the day…

Niall MacDowell – What is the value of CCS?

Niall MacDowell of Imperial College London presented and discussed his groups’ research into the value of CCS and started by posing a set of questions.

During his talk Niall demonstrated that the power generated from renewables is not equal to the power generated from fossil or CCS based sources due to way in which renewables integrate with the overall energy system. As renewables are inherently intermittent, Niall showed us that if the UK were to completely abandon the idea of CCS then we would need to build 2.5 times the total grid demand just so that we can ensure the lights don’t go out. It was further demonstrated that the addition of CCS to an energy grid would actually lower the cost of the total energy system.

It was demonstrated for the UK that power generation by gas with CCS would be the most valuable CCS technology for the UK to deploy. However, this is differs depending on which country you are suggesting CCS for, as value is a term relative to the existing generation of that country.

Niall also illustrated that having a very high efficiency technology (of any power generation type) really doesn’t matter, what really matters is the cost or more precisely the CAPEX. The question asked is “what will it cost to build this new power station relative to another power station?”, after this the next most important factor is how dispatchable is it – can it follow the supply curve of renewables?

At the end, Niall explained that unicorns (a super-duper amazing technology that is better than everything else but doesn’t exist yet) are not worth thinking about and we should just get on with it and build CCS. 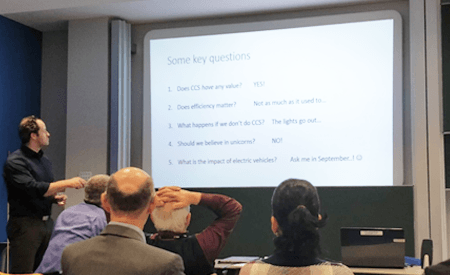 The session continued with Suzie Ferguson of wood company and she discussed their study on cost of different ranges of CCS technologies in UK.

She started with introducing the Wood Company (which is formed in 2017 by merging wood group and Amec Foster Wheeler) and then elaborated that wood’s work has covered different aspects and application of CCS. Their projects in different fields of engineering from conceptual development work to operation of plant have provided them with unique database to incorporate real project data in their studies.

Suzie explained that they had two key goals in this study, with the first one being technology performance & cost update conventional power plants with CCS technologies.  For this propose, they have gathered cost and performance data for different elements of the system namely: power plant, capture plant, CO2 compression and CO2 storage units from simulations and vendor data from similar projects.

Suzie demonstrated that, although the deployed capacity of CCS technologies will likely be similar, their auxiliary load will not. For e.g., the auxiliary load of coal-CCS is much higher than that of gas-CCS, resulting in coal-CCS being less efficient. She also added that although we capture more CO2 in coal plants (which in turn leads to higher CO2 transportation and storage costs), their carbon footprint will still be higher than abated natural gas plants. 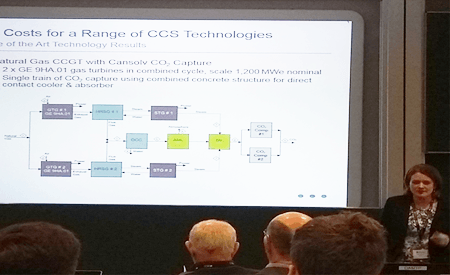 Suzie also discussed that post combustion routes appear to be more attractive as they introduce lower efficiency penalty and hence having lower LCOE. In agreement with Niall, she emphasized that cost is a better indicator to assess the value of a system rather than its efficiency. However, she added, there is some correlation between efficiency and LCOE and we see that plants with higher efficiency have lower LCOE.

Her results suggested that lowest LCOE with CCS was shown to be CCGT with proprietary solvent by a significant margin, mainly due to the high efficiency and lower capital cost of the plant and lower CO2 transport and storage cost due to lower carbon intensity of the fuel.

Suzie then moved on to the second key point which was assessment of novel selected technologies that are at early development stages, using same methodology as the previous one.

Despite high degree of technological risk these two leading novel technologies appear well positioned to compete with proprietary solvents for base load power generation (Mainly NG CCGT with CCS) if they can reduce their capital costs or improve further their efficiencies.

Andy Boston, former head of the Energy Research Partnership (ERP) based at Imperial College, and now director of the independent energy consultancy Red Vector, concludes this energy systems session by delivering his insights on how to decarbonise the Australian electricity market.

Australia has strong decarbonisation targets at the national and state levels – 100% renewable by 2020 and net zero emissions by 2050 – but no federal nor state policies to support them. In a recent study for the Australian government, Andy Boston investigated the optimal pathways to reach decarbonisation by 2050 and beyond, focusing on securing the grid and valuing its essential services.

For the purpose of this study, Andy designed the MEGS (Modelling Energy and Grid Services) framework, an electricity system optimisation model which minimises the short run marginal cost while meeting demand, reserve and inertia constraints. The model was validated at the state level, and key insights from the state of Queensland were presented. 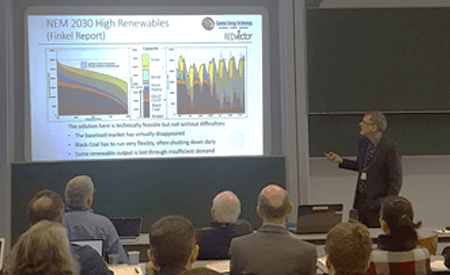 Andy then moves on to the cost of decarbonisation in different scenarios. In the high renewable scenario by 2030, it was found that there is no baseload market, and little curtailment of the renewables. With a peak demand at 33 GW, the system’s total capacity reaches 75 GW. This value however increases to 120 GW in 2050, with curtailment as high as 25-30%, and 200 $/tCO2 for a 50% emissions reduction target.

When alternative CCS pathways are considered however, higher emission reduction is achieved at a lower cost: with CCS the decarbonisation cost of 200$/tCO2 is reached for a 80% emission reduction target. In the 2050 Hybrid scenario (CCS and renewable), the system’s capacity reaches 72 GW to meet the 33 GW peak demand, and curtailment is limited.

With this study, Andy Boston therefore joins in with Niall to bust several myths when it comes to the future of the electricity system:

Andy finally concludes on future developments for its MEGS framework, including the addition of start-up costs and plant damage from cycling, to capture the flexible operation of plants, the optimisation of long term storage with imperfect foresight, and the implementation of a stochastic MEGS, to evaluate the impact of CAPEX, fuel prices and weather conditions on the results. We are looking forward to hearing about these developments at future UKCCSRC conferences!

In conclusion, this ‘Systems’ parallel session has been extremely useful in providing a wider frame of context to CCS, paired with fundamental technicality to really appreciate the effectiveness of this implementation. Niall’s message was very clear and made us feel positive and determined about the future: CCS does play a vital role in meeting our emissions reduction targets because in a realistic scenario, renewable energy solutions don’t have the capability alone to light our homes and cities in the UK. Not only does CCS have the potential to lower the costs of the energy systems, but most importantly waiting for the ‘perfect technology’ to show up before any implementation takes place would be counter-productive.

Interestingly, a high degree of complementarity is found between Niall’s and Andy Boston’s presentations, a speech that really gave us an insight of the Australian energy framework and their decarbonisation targets by 2050. The challenge still is the integration of CCS to increasingly hybrid and flexible energy systems  but the take home message still emphasizes the role of that CCS must play in decarbonisation especially in relation to the fact that clean energy can also be cheap.

The very interesting contribution brought by ‘Wood’ is vital to ensure that CCS technologies get continuously reviewed, optimized and therefore their implementation becomes less costly as emphasized by Suzi Ferguson. In agreement with Niall, she therefore identified cost-reduction as the key indicator of the value of a system, even more so than efficiency. With time, all technologies do get better, and CCS will be of no exception!

As early career and academic researchers, we are looking forward to see this generation finally implementing CCS systems and witness great advancements in emissions reduction, even through our research, work and dedication: we all are UKCCSRC!