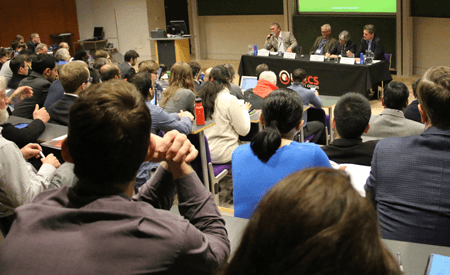 After the warm welcome to the speakers, Howard J. Herzog gave the first presentation – Updates from the US. He illustrated the recent strategies that the US has adapted to fight global warming and climate change.  These include support for renewable energy, improving energy efficiency, CO2 Storage Tax Credits (45Q) and Loan Guarantees, development of the Clean Power Plan, fighting fossil fuels and the establishment of State Carbon Prices. He gave emphasis on the new changes that had been made to the CO2 tax credit called 45Q for deployment of Carbon Capture and Storage projects, through the passage of the Future Act Bill in 2017 and explained the impact this had in reducing CO2 emissions in the US. He noted that the new 45Q changes will offer increased value, expanded eligibility and provide increased financial certainty for deployment of CCS in the US.   He further described how the CO2 prize of EOR, beneficial use and geologic storage is increased in value by the new 45Q reform. He also highlighted that industry will play a vital role in reducing CO2 emissions in the near future. He noted the challenges that faced CCS deployment in the US, the main point being the slowdown of the current government’s action on climate change and expressed concern of whether or not CCS remained a part of US’ climate change strategies. At the end, he concluded that CCS remains an orphan technology and requires more effort to be deployed. 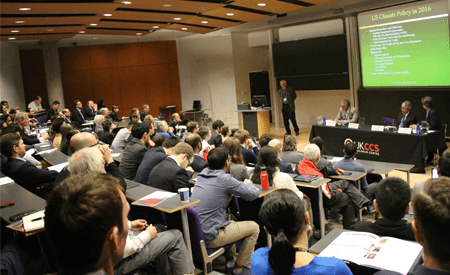 The next speaker, Jiro Tanaka, provided an overview of the Tomakomai CCS Demonstration project, a large-scale CCS project under current operation in Japan.  His presentation started off with a video to provide the audience illustrations and insights into the Tomakomai CCS project. He then described the different stages of the Tomakomai CCS demonstration project facility – CO2 source, Capture facility, Injection facility and Reservoir Storage. In the CO2 capture process, he pointed out that the cost-effective capture technology used for the project – the two-stage absorption system with low-pressure flash tower can reduce 1/2 and 2/3 energy consumption compared with conventional two-stage CO2 capture technology. He continued to illustrate the CO2 injection, storage, and monitoring and verification processes of the Tomakomai CCS demonstration project which gave the audience an impressive memory of their advanced monitoring system with 3D seismic survey to ensure safety offshore marine CO2 storage and reduce the risk and influence of other factors such as earthquakes. Moving on, the speaker made an interesting note on public engagement. It was mentioned that since the project is located only a few centimetres away from Tomakomai city, extensive public engagement remained a priority. Public outreach activities include comics/cartoons for kids showcasing climate change and the role of CCS, site tours for primary and secondary school children as well as creating a forum for the people of Tomakomai to advance understanding of CCS projects. As ECR members giving thought to the discussions, we reckon that there are many factors that promote the successful deployment of technologies such as CCS, aside technological advancement. It’s pertinent for proponents of CCS to develop and adopt the most suitable public outreach strategies for promoting public acceptability. Perhaps, we can start by taking a cue from Japan!

The final presentation of this panel was given by Jan Hopman, whose talk focused on CCUS developments in the Netherlands. Jan started by emphasizing the importance of CCS, showing an illustration on CO2 emissions according to which 1.5 ⁰C and 2 ⁰C target will be surpassed by 2021 and 2036 respectively. He then reviewed the previous planned and cancelled CCS projects in the Netherlands, due to various reasons including public resistance. He sighted a ‘ROAD’ project which was cancelled because coal was not desirable. The conclusion from the cancellation of ROAD was “CCS! You are not a swan, you are ugly”. However, the bad news was followed by some good news. Jan went through periodic updates on Government policies on energy between 2013 and 2018 and specifically mentioned that 2017 coalition government was very positive about CCS. “Ministry of Economic Affairs” was changed to “Ministry of Economic Affairs and Climate” and climate change was on top of the government agenda. Netherlands CCS road map is due to come late this year and start up projects are planned from 2021.

In addition, he also mentioned investments in industrial CCS and waste incineration with CCS was ongoing in the Netherlands. He reiterated that the technologies for mitigating global warming and climate change should begin from adopting energy saving techniques, encouraging renewables and finally deploying CCS. He concluded by pointing out that public engagement was a crucial factor to gain political support for CCS and predicted that global temperature will exceed 2oC if further measures were not taken on CCS.