On the first day of the UKCCSRC conference in Cambridge, four talks were held in the afternoon covering updates of CCS project developments within the UK. The agenda for the four talks were:

Each of the talks delivered gave a positive outlook for the future of CCS and its importance in meeting our carbon reduction targets. It was encouraging to hear about surviving commercial CCS activities in the UK, and it was encouraging to hear that CCS is a ‘no regrets option’ for the UK future – whether it be for heat (energy or hydrogen) or for BECCS. 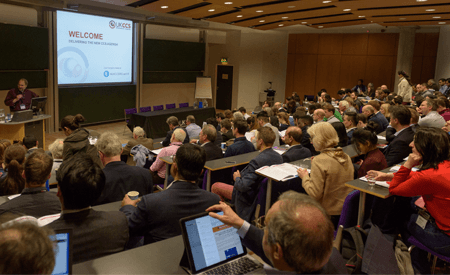 Stephen Kerr, project director of the Caledonia Clean Energy Project, kicked off this session by presenting the concept and results of the feasibility study from the Caledonia Clean Energy Project (CCEP) which aims to deliver CCS at Grangemouth. The two-year study was funded mainly by the Scottish and UK governments. The project proposes to capture CO2 from a (new build) natural gas fired power plant at Grangemouth, on the Firth of Forth in Scotland. 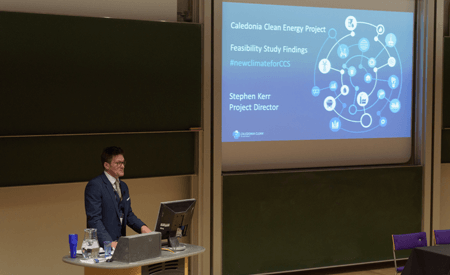 CO2 would be transported to the St. Fergus gas terminal (located north of Aberdeen) via the existing Feeder 10 pipeline. St. Fergus is one of four gas import terminals in the UK, and receives gas from the UK and Norwegian North Sea gas fields. CCEP proposes to transform the terminal from a gas import hub into a CO2 export hub, which receives CO2 captured onshore where it is transported to storage sites offshore. The existing offshore pipeline would be adopted to deliver CO2 from the terminal to the storage site. Depending on the configuration the project could potentially produce over 1.3 GW of low-carbon electrical power and economically capture 3.1 million tonnes of CO2 per annum for offshore storage and potentially for CO2 enhanced oil recovery (EOR) in the North Sea. Remarkably, the project could be delivered by 2025 with Contracts for Difference (CfDs) on a comparable basis at prices less than energy from the offshore wind requires.

The key findings suggest that the CCE Project meets the energy system challenges by providing flexible, reliable and low-carbon energy that can be integrated with renewables. The project also improves the CCS industrial cluster economics by at least 100%. These results suggest that CCE Project is technically and financially feasible, particularly as existing pipelines and well-defined storage could reduce the initial delivery risk and improve the project economics. Importantly, this means that CCEP may be financially attractive for the UK and Scottish Governments, investors and consumers. The analysed scenarios suggest that project could be delivered in the Strike Price range of between £80 and £90/MWhr (2012 prices), but the study also identified how four key policy changes could reduce Strike Price significantly compared to the prior CCS Competition levels.

The next steps for CEEP is to secure funding for a Pre-Feed study to define activities further, which aligns to the UK deployment plan. CEEP must work closely with governments in order to identify policy, fiscal support and commercial models to develop a real-world business case for the UK CCUS cluster.

In summary, we have learned that the UK could benefit from the existing infrastructure and technologies combined with improved policies to deliver low-carbon flexible energy to consumers.

David Hanstock, Director of Progressive Energy, began his talk by setting the scope of the UK’s relationship with natural gas, and so the challenge at hand. At present, gas contributes to 418TWh per annum to UK’s domestic heating and could provide up to 80% of the heat demand at peak times. To move forward the plan to reducing the carbon intensity in the UK’s gas network and meeting the emission targets, David introduced the Liverpool-Manchester (L-M) Hydrogen Cluster – a joint project between Progressive Energy Ltd. and Cadent Gas Ltd., which aims to promote the use of hydrogen in place of conventional natural gas in the gas grid. 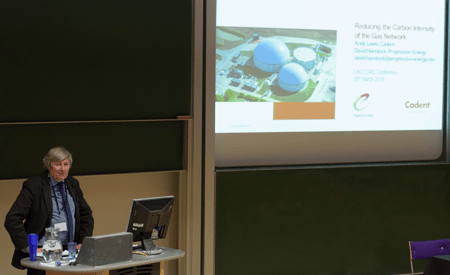 David suggested that the conversion to hydrogen as a fuel gas can be implemented in a step-wise manner – starting by replacing the fossil-based natural gas with biogas produced from anaerobic digestion of organic waste (low-carbon gas grid), followed by blending small amount of hydrogen into the national grid (low-carbon-hydrogen gas grid) and eventually deploying a high hydrogen system (high-hydrogen gas grid). If the natural gas grid in the L-M region was blended with 20% hydrogen by 2050, the system would save 120 Mt CO2 emissions and £8 billion cumulatively. The practicability of a blended hydrogen-gas system has been demonstrated successfully in the Netherlands and Germany, which allow hydrogen blends of 12% and 10% respectively. Phase 1 of the L-M HC project aims to demonstrate the first trial of injecting hydrogen into natural gas grid without causing disruptive changes for customers.

David used the 2016 Leeds City Hydrogen Project as an example to brief us about the increased interest in deploying low-carbon-hydrogen gas networks, and the potential role for CCS. The Leeds City study found that hydrogen derived via Steam Methane Reforming of fossil fuels would be necessary to provide hydrogen for the city at present, generating CO2 which could be captured for CCS. In other words, CCS is still a necessity for low carbon hydrogen until alternative processes for generating hydrogen are available at scale. The Liverpool-Manchester region was selected for a Hydrogen Cluster due to its unique proximity to geological resources that could provide extensive CO2 and hydrogen storage capacity, and the region’s high industrial gas demand.  David ended his talk by providing an overview of the current status of the L-M HC. The project is trying to abate more than 1 Mt CO2 from industry and domestic users and delivers 5-6TWh per annum of low carbon heat to the local citizens. Again, because the focus is towards providing low carbon heat to industries, he emphasised the importance of keeping CCS low-cost and reassured that the L-M HC will provide a solid foundation that can be extended and replicated in other locations globally. Even if there is no further hydrogen deployment, the L-M HC project represents a stable ‘no regrets’ step for decarbonisation in UK’s gas network. 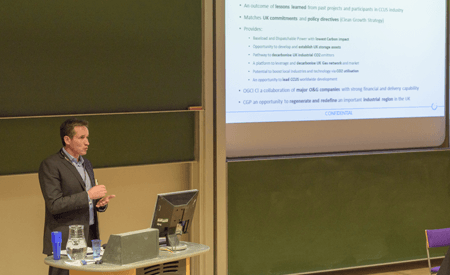 Jonathan elaborated more on the portfolio of OGCI Climate Investments projects. The first project was announced in October 2017, the Clean Gas Project (CGP). The CGP aims to design a full scale whole chain CCS project on a gas power plant. As the project will cost >$1 billion it must abide by certain pre-defined project management criteria to manage commercial risk. The CGP identified the UK as the most attractive country for CCUS, noting the UKs strong market, infrastructure and commercial fundamentals for industrial decarbonisation.

Overall, the collaboration of the different companies in OGCI brings about a practical action on climate change. A global network of partners working together to achieve speed and scale for combating the greenhouse emissions is truly commendable, and how welcoming to hear that the UK is perceived to be ‘open for business’ on CCUS!

The session’s closing speaker Mike Hemsley briefed us on the Committee on Climate Change’s (CCC) response to the UK Government’s Clean Growth Strategy for 2018 and beyond. The growth strategy presents promising prospects for CCS, as we would learn. The Strategy itself was the government’s response to 5th Carbon Budget (aiming for a 57% reduction in emissions on 1990 levels over 2028 and 2032) set out by the CCC just after the Paris Agreement. It was slightly disappointing to learn that the government had decided to postpone deploying CCS at scale till the mid 2030’s. However, Mike reassured us that the government has strongly been advised by the CCC to not plan 2050 decarbonisation targets without CCS – as implied in one of the long-term pathways of the Clean Growth Strategy. 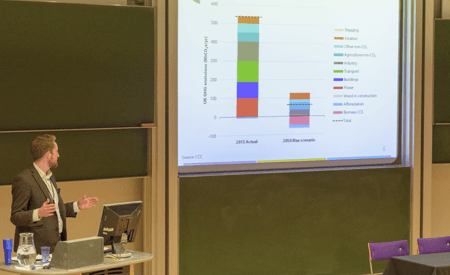 Mike pointed out that without CCS the UK would be left with more expensive and relatively unknown options such as decarbonising agriculture and the aviation sector – these options would be particularly challenging and financially burdening (almost double that of CCS). Once again, CCS comes out as one of the least expensive pathways for decarbonisation – despite everything we were hearing about cost in the previous talks. Not only did optimistic case scenarios highlight the ability of CCS to mitigate up to 85 Mt CO2 emissions, the cost benefits of CCS in the UK were clear, particularly where UK infrastructure and storage was shared.

Overall there seemed to be a sense of cautious optimism from the CCC. Yes, there are many exciting projects being announced by the government in line with the Clean Growth Strategy which incorporate the lessons learnt from the outcomes of the previously failed projects. However the CCC highlight that the government needs clear policies, with realistic and achievable programs that need to be deployed by the early 2020s in order to show its viability to be deployed at scale by 2030. In addition, funding mechanisms and new business models to support strategic CCS clusters and build up the supply chain must be facilitated for successful CCUS. While the government has come forward with a proposal for actuating these, there remains room for further improvement. In other words – it was clear that the government has the ambitions for CCUS but lacks the funding and details behind how exactly the program would be implemented. Only time will tell if these proposals would be put into action.

The talks ended with a panel discussion and time allowed the audience to probe the speakers for their thoughts and views and experiences. Since several projects had referred to using old oil and gas infrastructure, the question was raised as to whether the decommissioning timeline (i.e. the need to decommission unused infrastructure) would scupper these projects. While plans for the Caledonia Clean Energy Project and the Liverpool-Manchester Hydrogen Cluster would be adversely affected if they can’t act fast enough to use the infrastructure before the decommissioning deadline, Jonathan Briggs felt that this risk wasn’t a show stopper; the UK has plenty of options for infrastructure and storage and this is part of its attraction. Plans would simply need to adapt and cater for decommissioning regulations.

Jon Gibbins asked the panel what scale is a ‘good’ scale to usefully demonstrate capability. Mike’s response was pretty clear: GW scale by the 2030’s. Jonathan pointed out also that deployment at scale will reduce costs at scale. So large demonstration projects are clearly valuable, despite the many forms and options for CCS. When probed whether they felt natural gas or hydrogen is the most attractive or the largest player for CCS, David reflected that the issue really is flexibility in a renewables system, which can either be met by gas+CCS, or hydrogen storage (generated by a plant with CCS). The solution will depend on the characteristics of the region, but gas+CCS is perhaps for now (as it is low risk and warrantied) and hydrogen is for the future given there are more uncertainties regarding its development and financing. The panel felt that there were still things left to learn about CCS which the new ‘task force’ can deliver, such as financial risk sharing and how to manage this, and projections and scenarios for cost reductions during technology roll out and ramp up. And finally – following on from keynote speaker Chris Davies’ talk, the panel recognise and support the importance of advocacy roles that their organisations and projects play. So they are fighting CCS’s corner! 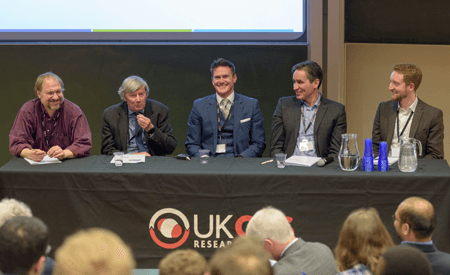 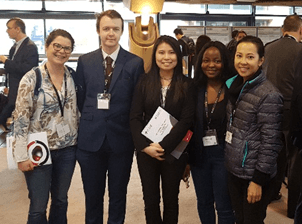