Delivering the new CCS agenda: CCS and the political process

The first day of the UKCCSRC Spring 2018 Conference opened with a talk by Chris Davies, a member of the European Parliament.

“The answer to climate change lies beneath our feet, underground”, he told to the 160+ audience just after relating the personal story about how he got convinced that CCUS was a real solution to reduce CO2 emissions. During the talk, Davies provided a general view of the political panorama regarding the CCUS development.

“We have not advocated enough for CCS technologies”. According to him, the lack of political commitment has prevented the materialization of CCUS in the UK. After the economic crisis in 2008, climate change ceased to be a priority topic in the political agenda. Furthermore, the timescale of the effects of climate change is too long in comparison to the 10 years politicians envision. However, the global challenge persists.

According to Davies, even though the well-respected work of IPCC states that the cost of climate change consequences will double if CCUS is not implemented, politicians tend to ignore these warnings. When working amongst peers and with the public, three main arguments against CCUS have been raised. Davies challenged these views.

It is not a tested technology. The fact that most of the technology used in CCUS is technology that is already proved and available was emphasised. Absorption, adsorption and other technologies have been used for other products. So, why not use them for CO2 capture?

It is not safe. Safety is a big concern in industry and to the public. However, Davies mentioned that people coexist with bigger risks on a daily basis. If safety was the main issue, shouldn’t natural gas in homes also be considered too risky?

It is too expensive. The MEP argued that in comparison to subsidies on renewables, CCUS budget is minimal. Furthermore, he made an interesting metaphor. “CO2 emissions are like garbage. You can think ‘It is not that bad. I do not want to pay someone to remove it’. Until it has accumulated so much that everyone is pressing you to clean it up, and then it becomes expensive”.

From his experience when talking with industry, Davies said: “We need to make a business case to drive forward the industry of CCS; businesses have to be convinced that investing in CCS will not put them in a competitive disadvantage”. He also argued that Governments have to accept long-term liability of the storage of CO2; otherwise, the private sector will not invest in CCUS technologies, as they are not able to take on the responsibility by themselves. Another tool Governments can use to catalyse the development of CCUS is giving value to the captured CO2. For example in Germany, there is an incentive of €80-90 per tonne of CO2 captured.

Davies urged the public to advocate for CCUS and established that unless we implement these technologies, the Paris Agreement targets will not be met. Emissions keep growing, population increases and the current infrastructure is set for fossil fuels. Also, if we want to change current energy systems to function with clean energy such as hydrogen, CCUS will be necessary. The reason is that green hydrogen – obtained from renewable sources- will not be enough to cope with the demand for fuel. Only with blue hydrogen – obtained from fossil fuels will we be able to cover the necessities.

His final recommendation was to challenge politicians about why they are not including CCUS on the agenda. Davies also pointed out that 99% of people in Europe are not even informed about what CCUS technologies are. This is, actually, a knowledge gap that we can address not only as institutions but also as scientists and people interested in preventing the consequences of climate change. 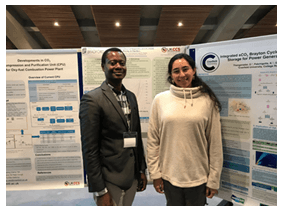 This blog was co-authored by Phebe L. Bonilla Prado and Suoton Philip Peletiri