Bio-CCS or BECCS – bioenergy with carbon capture and storage – has the ability to produce net negative CO2 emissions; this means the permanent removal of CO2 from the atmosphere.  The most recent report from the IPCC – the Intergovernmental Panel on Climate Change – highlights this as one of the key CO2 mitigation strategies (‘Fifth Assessment Report’, Climate Change 2014: Mitigation of Climate Change); they advocate that in the absence, or with only limited availability, of such mitigation technologies, costs can increase substantially in the medium to long term.  Furthermore, this is reinforced by the Committee on Climate Change (CCC, 2011) and the EU Energy Roadmap 2050, which both show that bio-CCS is in need of vital demonstration projects, recommending that: “CCS should therefore be demonstrated as a matter of urgency, not just because of its benefits when used with fossil fuels, but because negative emissions from using it with bioenergy will reduce costs and risks of meeting carbon budgets”.  At an international level, a key conclusion from a recent report published by the European Biofuels Technology Platform and the Zero Emission Platform (ZEP) also states that there is a clear “need for carbon-negative solutions such as bio-CCS – the only large-scale technology that can remove CO2 from the atmosphere”.

Despite these promotions, BIO-CAP-UK is the only research team currently looking at bio-CCS on a large scale; the consortium is aiming to address specific issues to deployment, remove some of the significant technical barriers to development, and progress current understanding of its potential in the UK energy system, so that realistic projections of deployment, costs and achievable greenhouse gas reductions can be incorporated in policy development.  The UKCCSRC BIO-CAP-UK project has the main objective of accelerating progress towards achieving operational excellence for flexible, efficient and environmentally sustainable bio-CCS thermal power plants by developing and assessing fundamental knowledge in this area.  This will be achieved through extensive pilot plant tests and techno-economic and life cycle studies.  This focuses on comparing to low-carbon (nearing zero or negative CO2 emissions) forms of power generation using biomass as the fuel feedstock: comparing air combustion coupled with post-combustion carbon capture to oxy-fuel combustion.  The work is divided between the four university partners (Edinburgh, Leeds, Manchester and Sheffield), with extensive input and guidance from our large industrial advisory board. 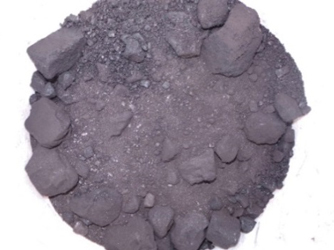 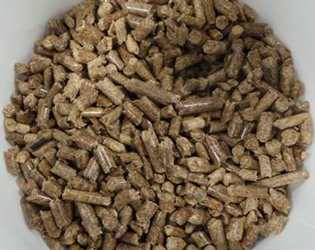 WP1 focuses on biomass characterisation – basically understanding the composition and properties of different biomass fuels, including the key components that can affect combustion behaviour and impact on downstream equipment in the plant, such as the capture unit (e.g. ash content, Cl levels and the presence of heavy/alkali metals).  This is assessing factors such as fuel ignition, combustion rate, char burn-out and ash quality at laboratory-scale, involving tests such as single particle combustion and devolatilisation and kinetics studies, as well as element partitioning and full elemental analysis.  So far, detailed characterisation work has been completed for a range of fossil and biomass fuels, which will form a database to be used throughout the subsequent work packages.  The fuels compared include torrefied spruce, El Cerrejon coal (Figure 1) and white wood pellets (Figure 2), the latter two of which are being used for the larger, pilot-scale trials at the UKCCSRC’s PACT National Core Facilities. 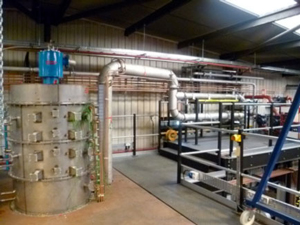 WP2 is the pilot-plant test campaigns at PACT using the 250 kW pulverised fuel reactor (Figure 3), comparing the air (Figure 4a) and oxy-fuel (Figure 4b) combustion of the El Cerrejon coal and white wood pellets characterised in the previous WP.  This will look at the air-firing of these fuels coupled with the on-site solvent-based, post-combustion carbon capture facility.  Furthermore, this will also assess the degradation products that are formed in the solvent when using biomass-generated flue gases, which has been considerably under-research until this point.  Oxy-biomass combustion will be evaluated using flue gas recycling within the system.  Detailed analysis of both operating modes will compare, among other factors, combustion efficiency, heat flux/transfer, gaseous emissions and ash characteristics for the different fuels. 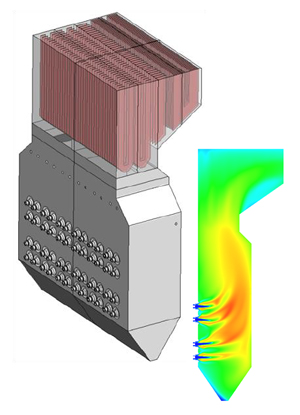 WP3 draws on the data gained throughout WP1 and WP2 to perform large-scale process simulations of a power plant for both modes of operation (air-firing and oxy-biomass combustion), which will be linked to CFD modelling of key rate-controlling components, such as the furnace (Figure 6).  Virtual power plant simulations will also be formulated here.  Lastly, WP4 is assessing bio-CCS value chains in the UK, through developing viable process configurations for different bio-CCS options and completing full life cycle and techno-economic assessments of each process.

It is hoped that the crucial research findings through this project will consolidate the UK’s position as world-leaders in technology understanding for the decarbonisation of existing coal-based power generation infrastructure.  Bio-CCS has a large and distinct potential for significantly lowering carbon emissions from energy production and thus the key messages from the UKCCSRC Bio-CAP-UK programme will have clear policy implications.

With just under a year to go on the project, work is progressing well.  Much of the feedstock characterisation work in WP1 has been completed, comparing the coal and wood pellets to be used at PACT to a range of other relevant fossil and biomass fuels.  Based on this information, we are now gearing up to run the pilot-scale combustion trails at PACT, under WP2, as the large quantities of fuel required have now been delivered.  The large-scale power plant simulations and the life cycle/techno-economic assessments (WP3 and WP4 respectively) are developing on schedule, utilising the data from WP1; these will be later be validated with the outputs from WP2.  Watch this space for further updates when the PACT plant is running and data is available!