This blog was written by Paul Tait, a UKCCSRC ECR from the University of Edinburgh, who received funding from the ECR Meeting Fund to attend the UKCCSRC Spring 2015 Biannual in Cranfield, 21-22 April 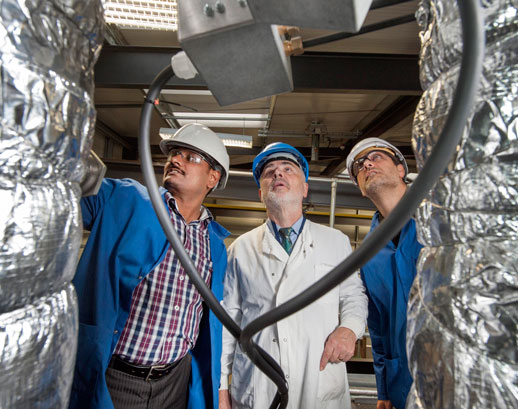 To kick off the biannual meeting, on the morning of Tuesday the 21st we were given a tour of the PACT facilities at Cranfield university. While looking at presentations and listening to talks is fine, it’s always nice to see some of the actual apparatus which we use to carry out all this research. I have visited the PACT facility at Sheffield several times, but wasn’t too familiar with what goes on at Cranfield, and I’m sure some of the other visitors were in that same situation.

While PACT at Beighton tends to focus primarily on combustion technologies and PCC using amines, the Cranfield facilities are fairly diverse. As a former chemist who is now attempting to be an engineer, one rig which I found quite interesting was the chemical looping combustion rig. This 50kw plant uses metal oxygen carriers which act as a source of O2 for the combustion, essentially acting analogously to oxyfuel combustion without the need for an expensive air separation unit. The metal is then re-oxidised in a separate chamber. The challenge comes in finding a suitable metal material which can be used cycle after cycle after cycle, or one which is cheap enough to easily replace, and if you were to ask the researchers working on this technology they would affirm that this is a non-trivial task!

The Cranfield PACT facility also contains the UK’s largest fluidised bed test system, a 200kW unit used for the gasification of solid fuels (coal, biomass) and with the ability to run both in air-fired and oxyfuel modes. Further down the line, we may need to understand and implement carbon-negative power generation options, and this test facility allows researchers to investigate one potential solution – oxyfuel combustion on biomass. A second 150kW fluidised bed system is also available, and is used to investigate pulverised fuel technologies including the co-firing of coal and biomass, with the intention of increasing efficiency. The final combustion technology apparatus at Cranfield is a gas turbine, which is currently being upgraded to function at temperatures up to 1500oC.

However, it isn’t only capture and combustion which are investigated at Cranfield PACT. The CO2 transport rig allows researchers to investigate the relatively unknown art of pumping supercritical CO2 over potentially hundreds of miles. Research focuses on developing new materials and corrosion inhibiters which can extend the lifetime and ensure the safety of pipelines for CO2 transport to the injection site.