Written by Dr Karen Finney, a research fellow at the University of Sheffield, whose attendance at the UKCCSRC 2016 Autumn Biannual Meeting in Edinburgh was supported by the UKCCSRC ECR Meeting Fund

Chaired by Niall Mac Dowell of Imperial College London, the parallel panel discussion session on CO2 capture cost reduction introduced speakers from industry, academia and beyond to assess the measures to reduce the cost per MWh of carbon capture.  This aimed to cover the innovations concerning a range of fuel types (coal, gas, biomass, etc.) and different capture options, including post-/pre-/oxy-combustion capture, as well as more innovative thermal cycles. 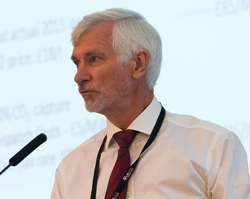 Patrick Dixon (CCSA) presented an interesting graph (draft only – watch the CCSA space for more outputs on this!) comparing the costs and efficiencies of gas-CCS plants.  This looked at where the different CfD strike prices sit and how the changes in CAPEX (£/MW capacity) and net plant efficiency are affected – with a number of economic assumptions, of course.  This also plotted information for where the now-cancelled Peterhead CCS project would have sat, as well as from the CCS Cost Reduction Task Force, taking into account future changes in this sector, leading to notable improvements in efficiency and thus cost reductions over time. 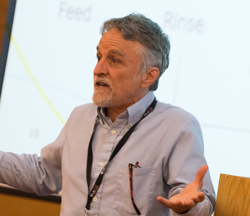 Tim Golden (Air Products) looked at a variety of CCS options – H2 production via steam-methane reforming, retrofitting technologies, process intensification and physical adsorbents – and how improvements and advancements in these areas can lead to cost reductions.  The key messages here?  Size matters when it comes to absorbers for post-combustion CCS; if the working capacity can be improved through process intensification, size reductions can result in lower costs at the same or better efficiencies.  Adsorption however doesn’t have the same issues as chemical capture, as it is a physical process.  Furthermore, comprehensive yet flexible thermal integration is vital, especially when there are temporal variations in steam and electricity outputs – and the relative values of each. 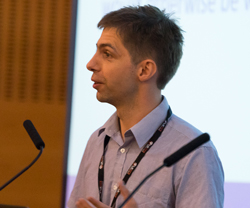 In the final presentation, Stuart Scott from the University of Cambridge considered innovative thermal cycles, focusing on those using high-temperature metal oxides, such as Ca looping, although many different oxygen-carriers have been considered for such applications.  There are many advantages and disadvantages of these – most notably the decreased OPEX versus the increased CAPEX, however these vary widely for different fuels, oxygen carriers and plant size/type.  As Stuart points out though, as there are no large-scale demonstrations, cost assessments at this stage are inherently problematic – issues include different authors making different assumptions, the variations in lifetimes of the sorbents, plant availability and CAPEX discrepancies.  On a more positive note, whilst lab-scale trials have shown that it is technically feasible, progress is also being made to scale-up and improve the duration of this set of technologies, through pilots and demonstrations – in particular by using lower cost materials.

The discussion session after these presentations brought questions from the audience concerning a variety of aspects that has been previously touched upon.  These included: do circulating fluidised beds for Ca/chemical looping combustion operate at the correct scale?; can amine scrubbing get us to the ‘magic’ £85/MWh?; what impacts will new CCGTs and integration options have on the CCSA graph?; and perhaps most importantly, is there a focus on costs, rather than on effective and efficient operation?

Stuart Scott commented that although there are plants operating that demonstrate the components of circulating fluidised beds for Ca/chemical looping combustion work effectively, though currently separately, these are not integrated at present into a full-scale operational CLC plant.

Patrick Dixon thinks that refurbs of plants to integrate capture technologies, such as amine scrubbing are the best way for cost-effective deployment – although there are caveats on deliverability with regards to the timescales needed to achieve an acceptable £/MWh.  However, new CCGTs and their potentially superior thermal integration can result in higher efficiencies and could perhaps avoid many issues that would be faced by retrofitting the technology.  The main issue for gas-based power here is that it will largely not be used for baseload – rather instead it will be used for load-following and thus experience significant periods of ramping and transient behaviour to allow for increasing but intermittent renewables penetration into the wider energy system.  Since it is currently inherently difficult to ramp carbon capture plants, as a result, it may be problematical to use post-combustion capture based on amine scrubbing techniques on such power stations.

Lastly, it was considered what the £/MWh should include – just capture?, or should transport and storage been included in this as well?  It was largely accepted that if the price is set at the ‘magic’ £85/MWh, then it should only include the capture of the CO2.  The infrastructure required for full-chain CCS will though necessitate the capital to build appropriate and most likely numerous transport pathways and additional finances will be required for the safe utilisation and monitoring of suitable storage facilities – the question of ‘who pays for this?’ however was left unanswered . . . . . .