As at previous COPs, the distribution of the final text, which had been through two weeks of negotiations, and the convening of the final plenary session was delayed…and delayed…BUT on the evening of the 12 December 2015, Laurent Fabius, the French Minister for Foreign Affairs and the COP21 President, brought down his gavel to announce the Paris Agreement had been adopted.

This was a truly historic moment and although, two weeks on, we know the agreement isn’t perfect, it is significant that over 180 countries have made this commitment to fight climate change.

So what does the Paris Agreement say? And why is it important for the UK CCS community?

The agreement includes a target to ‘hold the increase in the global average temperature to well below 2°C above pre-industrial levels’ and ‘to pursue efforts to limit the temperature increase to 1.5°C’.

It also underlines, in Article 4, the need to ‘reach global peaking of greenhouse gas emissions as soon as possible, recognizing that peaking will take longer for developing country Parties, and to undertake rapid reductions thereafter in accordance with best available science, so as to achieve a balance between anthropogenic emissions by sources and removals by sinks of greenhouse gases in the second half of this century.’

It is significant that the agreement includes an ambition to get to 1.5°C but some Parties may not feel it’s ambitious enough – such as vulnerable island states that were pushing for 1.5°C to be the goal.

In addition, the wording in Article 4 of the agreement, which was preceded in earlier versions of the text by language around ‘greenhouse gas emission neutrality’, reduction targets and timelines, is disappointing and has been criticised by some delegates and observers.

It is clear that transformative action is needed at the national level to enable countries to meet the targets and commitments they made in Paris as they will now need to, under the agreement, submit action plans outlining how they will curb global emissions, with a five-yearly system of reviewing and ratcheting-up of ambition. 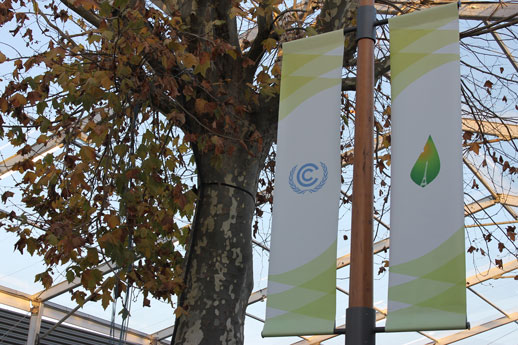 As we know, Carbon Capture and Storage is a technology that is key to decoupling greenhouse gas emissions from fossil fuel consumption and so will be of vital importance in a future where the global community strives to limit temperature increase to 1.5°C and meet greenhouse gas emission neutrality in the second half of this century.

At an evidence hearing on the outcomes of COP21, convened by the Energy and Climate Change Committee (ECCC) on the 16 December 2015, the Rt Hon Amber Rudd MP, Secretary of State, Department of Energy and Climate Change, was asked how the UK will meet the 1.5°C target and whether there would be retrospective adjustments to recent changes in UK energy policy in light of the Paris Agreement.

Secretary of State Rudd said the 1.5°C target was aspirational, that moving from the current trajectory of 2.7°C to 2°C takes priority and that the UK’s 2°C target, enshrined in the Climate Change Act, is operational. She also stated that she had set out a ‘clear direction of travel’ in her ‘New Direction for UK Energy Policy’ speech on the 18 November 2015 and that the future is going to be ‘low carbon and value for money’.

This did not prevent the Committee from criticising recent Government decisions to remove subsidies for renewable energy and the announcement on the day of the Spending Review to cut the £1 billion ring-fenced for the CCS commercialisation programme – a move that was branded by the Chair of the Committee, Angus MacNeil MP, as ‘penny wise pound foolish’ as he called on Ministers to ‘resist short term political pressures that seek to slow down low carbon transformation’.

It is difficult to know what the future holds for CCS in the UK but Secretary of State Rudd did state in the ECCC evidence hearing on COP21 that CCS will be necessary in long term plans (2060s and later) to meet ambition and will be important for dealing with industrial sources of CO2.

The question I have is whether any of this will be soon enough to enable the UK to meet the commitments it made in Paris. To quote Lord Deben, Chairman of the UK’s independent Committee on Climate Change, ‘the UK will have an issue meeting its 2030 target without CCS’.

And so for now, I look forward to the Secretary of State’s response to Mr MacNeil MP’s request for information on the reason behind the decision to cancel the CCS competition and will watch with interest the one-off session the ECCC is convening on the CCS announcement, on the 12 January 2016.