CCS research at the annual meeting of the European Geoscience Union

Written by Johannes Miocic, PhD student at University of Edinburgh whose attendance at the event was supported by the UKCCSRC Early Career Researcher Professional Development Grant 2013

The annual meeting of the European Geoscience Union (EGU) was held in Vienna (Austria) from 28th April to 2nd of May 2014. It is the largest conference for geosciences in Europe with more than 12,000 attendees from over 100 countries which attended more than 550 sessions with around 15,000 poster and oral presentations. While CCS contributed only to a small amount of the vast number of presentations, there were two full days with contributions to carbon storage research! The other three days could be used to drop by at storage related sessions on tectonics, structural geology, sedimentology or fluid migrations in the subsurface. This mix of focused sessions on CCS and sessions where one can get a lot of new ideas and see similar research from different perspectives makes attending EGU really worthwhile. In the following some of the highlights (based on the author’s opinion) are outlined. 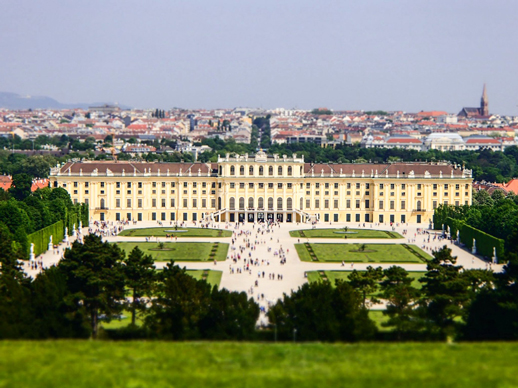 The integrity of well cements, especially in old and abandoned wells, is a big concern when it comes to the security of CO2 storage sites. Interaction between CO2-rich fluids and the cement could lead to dissolution of the cement and creation of high permeability pathways along the well bore – and thus to possible leakage pathways. Studying the impacts of CO2-rich brine on cements in laboratory experiments is therefore important! Such experiments were done by Tim Wolterbeek and his team from the University of Utrecht and they could show that even though the self-sealing capacity of cements is limited, the changes of permeability after two months of reaction are well within one order of magnitude. In addition, the reaction rate seems to go down over time. Overall the results of this study show that well cements may not be of as much concern as previously thought!

With CCS getting more attention in Norway the Norwegian Petroleum Directorate (part of the Ministry of Petroleum and Energy) created three big atlases on offshore areas around Norway (North Sea, Norwegian Sea and Barents Sea) in which they identified safe and effective areas for long-term CO2 storage. The atlases can be found online. One of the main objectives of the research was to make sure that CO2 storage sites would not interfere with current and future hydrocarbon exploration and production activities – this made the project more challenging and rendered large areas unsuitable. The presentation by Rita Sande Rod was on the Norwegian Sea and how she and her team identified several formations/aquifers as potential storage sites. Most of the targeted saline aquifers dip with 1-2 degrees from the Norwegian coast towards offshore regions and one concern is that injected CO2 might migrate updip towards the coast where it may leak into the sea or groundwater aquifers. However, they could show that when injecting 400 million tons of CO2 over 50 years most of the gas will have gone into solution or will be residually trapped long before it migrated updip. Their simulation of the CO2 plume lasted for 10.000 years and covered different injection locations and injection rates but for none of the simulations leakage would occur. 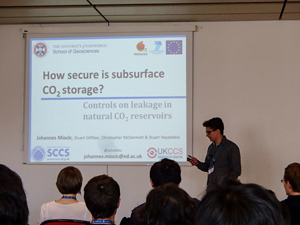 One of the main current research areas within CCS is the monitoring of the CO2 plume during and after injection in the reservoir. There are many different methods on how this can be done, from geophysical approaches like seismic (4D ideally) or resistivity to geochemical techniques that measure the arrival of the CO2 plume directly. Christin Strandli from Stanford University presented a method I haven’t heard much about before the conference: Using several stacked (multilevel) transient pressure detectors she and her team were able to track the migration of the CO2 plume in the CO2 storage site of the Illinois Basin Decatur Project. The idea behind the method is that the initial pressure within the reservoir changes once CO2 injection starts as the CO2 displaces the formation water close the injection well. This pressure build up can be measured in a monitoring well away from the injection site well before the CO2 actually arrives at it. With this method it is also possible to create a good hydrogeological model of the reservoir which in turn can then be used to predict the future CO2 migration!

In a non-CCS related session I came across an unexpected and, for me, new way to store CO2 or did you know that there is the possibility to store CO2 in gas hydrate form while at the same time increasing the production of methane from gas hydrates? It never crossed my mind before I saw presentation on simulating subsea gas hydrate exploration! While the actual implementation of this theory is not going to happen any time soon, it was good to see that there are CO2 storage options that increase the production of hydrocarbons other than EOR/EGR. The idea is that CO2 displaces CH4 in the gas hydrate using the fact that CO2 hydrate has a bigger stability field than methane hydrate. Using CO2 shows a significant boost in production after four years, while initially there is not much difference.

If you want to know more about my EGU2014 experience have a look at my blog where I wrote more about each day!