Written by Muhammad Akram , a Research Associate at the University of Sheffield, whose attendance at the UKCCSRC Biannual Meeting – Making the Case for CCS – in Edinburgh was supported by the UKCSRC Early Career Researcher Meeting Fund.

The report written by the Parliamentary Advisory Group on Carbon Capture and Storage chaired by Lord Oxburgh to the Secretary of State for Business, Energy and Industrial Strategy, titled “Lowest Cost Decarbonisation for the UK: The Critical Role of CCS” published couple of days before the Biannual was the most talked about event of the meeting. 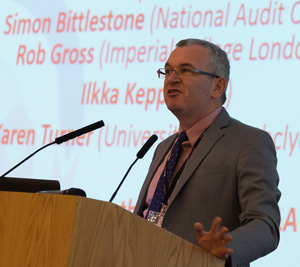 The session “CCS in the Wider Economy” chaired by David Reiner of the University of Cambridge, started with first speaker Simon Bittlestone, Audit Manager at the National Audit Office. Mr Bittlestone spoke on the role of the Government in CCS and highlighted the key findings of the National Audit Office report written to DECC published in 2012. He summarised the key recommendations of the report, including;

Mr Bittlestone then discussed the response from DECC to the recommendations by the National Audit Office. Here are some of the key steps taken by the DECC. 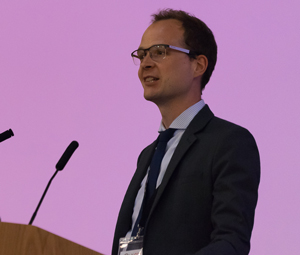 However, there were still some outstanding issues such as “post competition objectives, storage risk, clarity over the available support through CfDs and if the competition model was the right choice. He mentioned that these issues are going to be assessed in the National Audit Office report due to be published later this year.

Mr Bittlestone then talked about the findings of another report “Sustainability in the Spending Review; Briefing for the House of Commons”, published in July this year. Key findings of the report are:

Mr. Bittlestone then highlighted the DECC’s bid and HM Treasury’s view in the “Case study: The cancellation of the CCS competition”.  Mr Bittlestone then talked about assessing costs and benefits by comparing “projects approved by the Treasury” and “projects rejected by treasury”. Mr. Bittlestone then closed the talk with the Government 5 case model i.e. strategic case, economic case, commercial case, financial case and the management case. 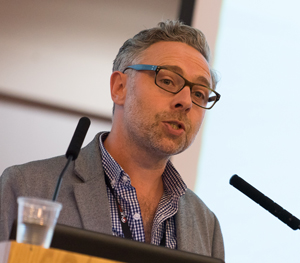 Dr Rob Gross from Imperial College was the 2nd speaker of the session. He talked about Why plan A for CCS failed and is there a plan B? Dr Gross opened his talk with “some key advice post CCSxit” and highlighted some documents i.e.

Dr Gross then stressed the need for CCS and mentioned that it is the only option for some sectors, CCS will lower overall cost for meeting carbon targets, focusing first on power will enable role of CCS and strategic roll out could deliver  below £100/MWh in mid 20s. Dr. Gross then compared findings of the Lord Oxburgh’s report with Committee on Climate Change documents.

Dr. Gross asked a question “why did plan A fail” and given some answers. Key highlights are below;

Dr Gross closed his talk with final thoughts and some remaining questions. He pointed out that Plan B is emerging for post 2020 but it is not clear how to get from here to there and asked some questions on “Has all the private sector appetite for UK CCS evaporated?, Does Brexit changed everything, anything or nothing? 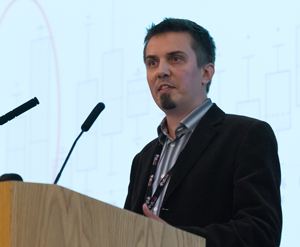 Dr Ilkka Keppo of UCL Energy Institute, University College London, was the 3rd speaker of the session. Dr. Keppo talked about “Impact of technology uncertainty on future low carbon pathways in the UK – Focus on CCS”.

Dr. Keppo opened his talk by mentioning about wholeSEM, an initiative build by UCL, ICL, University of Cambridge and University of Surrey to develop, integrate and apply state of the art energy models. The project runs from 2013 – 2017 and is funded by EPSRC.

Dr Keppo talked about the approach taken to develop two opposing technology narratives for each of the energy technologies, quantify the qualitative narratives and use them as inputs in the energy system model UKTM and construct a scenario matrix combining all possible technology failure/success combinations. This results in 32 scenarios, all with 80% emissions reduction targets by 2050.

Dr Keppo talked about the storyline for CCS and highlighted goods and bads. He stressed that the good thing about the CCS is the unique nature of the CCS as a technology allows it to overcome challenges posed by its competitiveness with other low carbon technologies, financial feasibility, infrastructure and storage risks, regulatory framework and public acceptance. On the other hand, several challenges faced by CCS are to be difficult to overcome and CCS never develop beyond the use cases that exist today was termed as “bad”.

Dr Keppo then mentioned the capabilities of the UKTM model (The UK Times Model). It is a least cost optimisation integrated energy system model uses partial equilibrium with sensitivity and uncertainty analysis. He mentioned higher temporal flexibility, all GHG emissions and non-energy mitigation options and industrial and residential sector disaggregation as the new functionalities of the model.

Dr. Keppo also talked about reference scenario which takes into account the power generation dominated by Nuclear (66%) and biomass-CCS (20%) and CCS used in the power generation and for H2 production. He then talked about the fuel use variability in 2050 across the scenarios and highlighted the greatest variance of natural gas, bioenergy potentially used to its full capacity, wide range for renewables and H2 and strong link of use of H2 to CCS. This then lead to the correlation between fuel use in 2050 and CCS availability. Availability of CCS has a boarder impact on fuel choice than most other technologies and is the key for transport pathways.

Dr Keppo then compared emissions reductions (2010-2050) from different sectors with and without CCS. He highlighted that electricity can be decarbonised with or without CCS but the negative emissions can only be achieved with CCS and that lack of CCS increases pressure on the end user to reduce emissions. Dr Keppo then spoke about cost and feasibility of reaching the mitigation targets before concluding his talk by highlighting “CCS a key technology and, while not irreplaceable, important for keeping the costs down”. 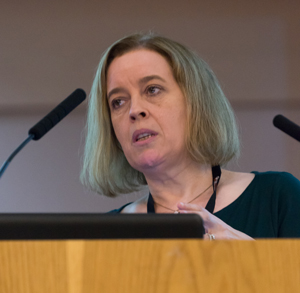 The 4th and final speaker of the session was Professor Karen Turner of the Centre of Energy Policy, University of Strathclyde, whose talk was titled “Making macroeconomic case for CCS”. She started her talk by highlighting that there is “a crucial gap” that is the energy system models used in government decision making consider CCS as a costly technology that can be turned on and off. She tried to draw an analogy with waste disposal, where there is an existence of industry with infrastructure in place having operational activity. She highlighted that it has to be emphasized that we need to deal with the CO2 as we dealt with the waste due to local and global health issues and that the economic case of CCS should be much stronger.

Prof Turner highlighted the problem of initial investment costs and termed it as “getting over the hump”. She again tried to draw analogy of CCS with other activities by saying that “average cost will decline over time”. She said, in the case of CCS, infrastructure development is an economic activity. But, the problem is that we don’t consider CCS as an economic activity as we think of other activities like transport for example.

Prof Turner highlighted that “CCS is an evolving economic activity” and reiterated that the cost of CCS will come down with advances and evolution including links to other low carbon technologies such as using renewable energy for capturing, learning by doing and by economies of scale with fuller deployment. She went on to saying that benefits will evolve through multiplier effects of employment, retention of carbon intensive industries and circular economy such as carbon utilisation.

Prof Turner then talked about social cost benefit analysis, highlighting HM Treasury “Green Book” method. She said that there is need for information on a range of wider costs and benefits of a range of project types and investments including environmental and climate change mitigation projects. Dr. Turner highlighted that despite different approaches adapted by HM Treasury and DECC, “Fiscal, macroeconomic and distributional impacts remain key in public budget decisions”.

Prof Turner closed her talk by talking about integrated economic and technical system modelling. She mentioned that modelling CCS in CGE framework will allow dynamic evolution of CCS, however, economy wide model must be informed by techno-economic models of capture, transport and storage in order to get things right and to make a decision on ‘to do’ it or not.

There was a question and answer session at the end which was joined by Rupert Wilmouth, the opening keynote speaker. 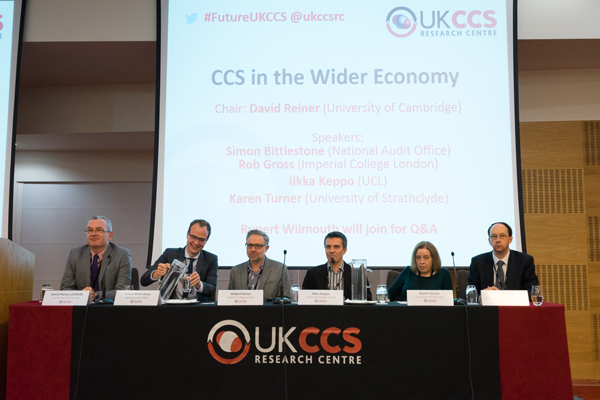