This blog was written by Rebecca Cunningham, a UKCCSRC ECR from the University of Manchester, who received funding from the ECR Meeting Fund to attend the UKCCSRC Spring 2015 Biannual in Cranfield, 21-22 April. 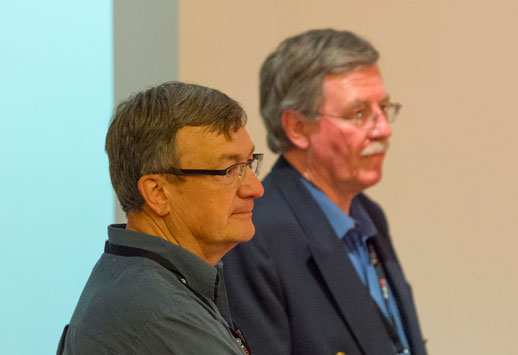 The UKCCSRC Cranfield Biannual opened – the sun was shining and birds singing on campus, and the Vincent Building began to swell with delegates from around the globe.

The afternoon began with welcoming remarks from Jon Gibbins – Director, UKCCSRC who offered a warm welcome to all delegates and was most enthusiastic about the overarching program, which indeed did not fail to deliver a broad while detailed insight into the current standing of CCS research, innovation and implementation both within the UK and further afield

Prof Sir Peter Gregson – Chief Execute and Vice-Chancellor of Cranfield University further extended the welcome to the entire delegation to the Cranfield site, as set the scene of Cranfield, uniquely being solely a post graduate university and further being one of the world leaders in CCS technologies alongside other sectors.

Max Ball presented on “Building on the success at Boundary Dam“ wherein the presentation included a discussion and short video tour of the Boundary Dam Integrated CCS Demonstration. Boundary Dam is the world’s first commercial scale integration of coal fired power with full stream carbon capture, representing a landmark development for CCS. SaskPower’s Carbon Capture Tet Facility and also the injection site Aquistore is now coming online, with injections beginning this month.  Although the plant may capture up to 2,000 Mt of CO2 /day the plan is likely to inject a much smaller amount, as they on sell CO2 to both the USA and further in Canada to other commercial enterprises for Enhanced Oil Recovery (EOR). SaskPower has undertaken a series of public engagement programs, and within the primary build of the CCS plant, ensured much of the fabrication of materials was undertaken locally, so that funds were spent locally, and local people and companies benefited financially from the project. This investment into the local community has increased the social license to operate in the area, however further work in regards to storage is required.

Don Lawton focused on “Monitoring conformance and containment for geological carbon storage: can technology meet policy and public requirements.” This focus shifted within the province of Alberta, Canada, where in the governing bodies identified carbon capture and storage (CCS) as a key element of its 2008 Climate Change strategy. The target is a reduction in CO2 emission of 139 Mt/year by 2050. The province in involved in two demonstration scale projects, namely the Quest Project by Shall and partners (CCS), and the Alberta Carbon Trunk Line Project (pipeline development and CO2-EOR). The Containment and Monitoring Institute (CaMI) is in the process of developing a Field Research Station (FRS) in order to develop greater monitoring capabilities.

This suite of presentations highlighted the need and furthers the feasibility and actuality of CCS globally. The ongoing CCS activity in Canada may indeed provide key insights for the global sector, particular within technological areas of storage and monitoring as well as public engagement and ascertaining a social licence to operate.