This blog was written by UK ECRs, funded by the UKCCSRC’s ECR Meeting Fund, to attend the CATO-2 7th Dutch CCS Symposium

On Thursday 19th June, UKCCSRC early career researchers (ECRs) were invited to participate in the 7th Dutch CCS Symposium which was held at the very impressive RAI conference venue in Amsterdam. The two day conference highlighted the achievements of integrated CCS research both in the Netherlands as part of CATO-2, and internationally.

Under the theme CCS progress & next steps, the 7th Dutch CCS symposium brought together scientists, industry, policy makers and decision makers in Amsterdam. CATO-2 organized this two-day international and multidisciplinary conference to celebrate the achievements of integrated CCS research not only in the Netherlands but also in other committed countries. We had the chance to learn about the latest developments in capture, regulation, transport, storage, public perception and implementation of CCS.

Prior to the start of the conference, all participants were asked to fill out a questionnaire, where results from this will be used to trial a new way of ‘networking’ and participating during presentations through the use of an innovative bracelet called EmbraceLED. The questionnaire focused on four key areas in CCS; our personal involvement, CCS misperceptions, main barriers for CCS and a storyline which best fit our character. The idea behind these bracelets was that they would facilitate networking, where the system would automatically match you with others who share similar interests and ideas based on the questionnaire. The bracelets will start to blink when it detects a match of two persons within 2-3 meters. As you get closer the bracelet will blink faster, as well as lighting up in a particular colour based on similar interests. After a while the EmbraceLEDS will try to find your next match. Although this was a very interesting and new way to network, personally we felt that it didn’t stimulate as much discussion as the organisers might have hoped, mainly because students were comfortable enough to talk to people directly and use it as an opportunity to discuss our research, often forgetting about the matching system. 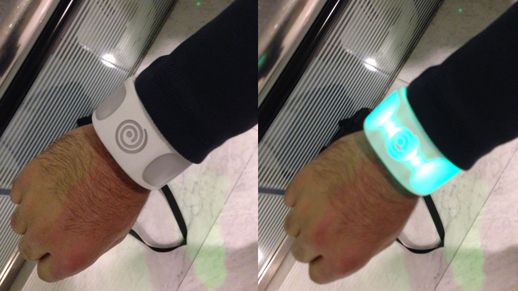 During plenary sessions the EmbraceLEDS were also used as voting mechanisms when presenters poised questions to the crowd. The light of the bracelet changes colour when pushed so that everyone is able to submit their vote. Although a very interesting and interactive concept, quite a few technical issues arose during the voting procedure, which by the end of the day resulted in the tried and regularly used voting system of raising your hand for each answer.

The symposium itself was split into two days, the theme for Day 1 was CCS progress and next steps, and Day 2 was CATO-2 results, Advances in CCS research: progress and achievements.

Day 1: CCS progress and next steps

The first session of presentations was themed CCS implementation strategy, chaired by Stan Dessens, Chairman of the Executive Board of CATO-2. The first presenter was Brad Page, CEO of the Global CCS Institute (GCCSI), who provided a global overview of the current status of CCS projects and global policy and regulatory developments. His presentation included information regarding the increase in the number of currently active and planned large-scale CCS projects since 2011 and various predictions for 2020.It seemed clear that North America continues to dominate the project landscape with EOR a main driver for CCS deployments, but China was also highlighted as playing an increasing role in the future. He mentioned that CCS projects in Europe had stalled and that CCS in Europe is currently being driven by projects in the UK and the Netherlands (namely Peterhead, White Rose, Don Valley, ROAD) as well as the continued work at Sleipner and Snøhvit. Operational projects are identified as key to positive perception of CCS and to raise public awareness about the understanding of CCS.

The next speaker was Vassilios Kougionas (DG Research & Innovation, European Commission) who gave an overview of the EU Energy Policy Framework and introduced Horizon 2020, the new European Union Programme for research and innovation. The speaker focused on three words which should define the electricity system, “Secure, Clean and Efficient”.

Following a short coffee break trialling out our new networking tools, EmbraceLEDs, four presentations followed, focused on CCS developments in the Netherlands. Of greatest interest was the presentation by Andy Read, Capture Director of ROAD, who presented the value of CATO for demonstration projects,  the ROAD case. In this presentation, Andy highlighted and stressed the need for constant communication and collaboration between government and industry, as evident by the link between CATO and ROAD: a symbiotic relationship.

Andy emphasised the different areas of research with significant contribution to ROAD, and the deliverables from ROAD that have provided the technical projects in CATO-2 with valuable pieces of information.

The CATO-2 research has been crucial in the progress of the ROAD demonstration project. Highlights of the achievements of CATO-2 are:

During the lunch break, we had the chance to speak to people on the exhibition stands and participate in various experiments about CO2 properties. This included a set up of the capture process developed by University of Twente and on-site experiments conducted by researchers at Utrecht University, in an attempt of showing CO2 properties relevant in the transport and storage (e.g. higher density than air), which were particularly interesting. 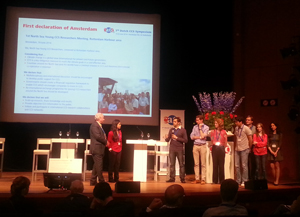 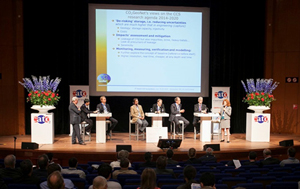 The first day of the symposium concluded with a panel discussion with representatives from international CCS research organisations: Professor Wei Wei from Shanghai Advanced Research Institute (SARI-CAS) (China), Mr Jon Magne Johansen from Big CCS Center (Norway), Professor Stuart Haszeldine  from Scottish CCS (Scotland), Professor Jon Gibbins from the UKCCS Research Center (United Kingdom), Mr Jan Brouwer  from CATO (Netherlands), Mr Robert Kleiburg from  TKI Gas/ECN (Netherlands) and Mrs Isabelle Czernichowski-Lauriol from CO2 GeoNet (France) (from left to right in the photo below). The presentation included a general overview of the stage of the CCS demonstration projects in each country, a general overview of each research institutions, a brief introduction of the research and activities being carried out in the different areas of the full CCS chain, highlighting the budgets and the industrial partner contributions. Challenges and difficulties to move forward were also mentioned. Of particular interest were the different drivers for the deployment of CCS in each country, and the need for international cooperation for full scale CCS to happen.

During the second day of the 7th Dutch CCS Symposium, hands-on carbon dioxide experiments, table top presentations and CCS posters were presented. Indicative of the sheer size and attendance of the conference, six parallel sessions were organized for the day. These included research in capture, CO2 transport and chain integration, two underground storage and monitoring sessions, regulation and safety, and public perception. Presenters at these sessions included researchers, government personnel and industry, providing us with a great overview of the state of the art research currently being done in CCS in Europe and the world.

The ROAD project was of great interest to the audience was the research and current state of. From a ‘capture perspective’, Andy Read, Capture Director of ROAD, gave a detailed presentation on the Technical challenges of the ROAD capture project. The presentation began with an introduction to the MPP3 (Maasvlakte Power Plant 3) carbon capture plant and then went through different technical challenges of the project.

Some of the technical challenges that they had to face during the execution of the project were:

With respect to underground storage and monitoring, Cor Hofstee, TNO, gave a very detailed presentation on the subsurface aspects of the ROAD project, highlighting the geology present in the reservoir and the monitoring strategy and plan moving forward. A monitoring philosophy was also highlighted, were providing a balance between efficiency and cost is key. This was presented as a traffic light model, where green represents monitoring data which falls within the expected range, while red stresses the need for scale up monitoring intensity as the data is outside the defined bandwidth.

The end of the parallel sessions provided us with an opportunity to further network and discusses our research over drinks. 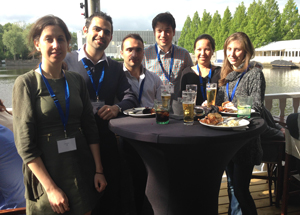 Overall the symposium was thoroughly enjoyable and educational, with very interesting talks covering every aspect of CCS. It gave the young researchers as well as the seasoned participants an opportunity to observe where they stood in the grand scheme of CCS, both in the sense of their individual research and the progress of CCS technologies. The main take-home message, which we  believe was stressed to us in most talks, was that there is no sustainable energy without CCS and that we, as early career researchers, will play a key role in this moving forwards; our declaration demonstrates this commitment.