Blog post number 2. In which I talk about CCS for the first half.

Home » Blog posts » Blog post number 2. In which I talk about CCS for the first half.

It has been a few months since the last one of my posts and I thought I’d write something – mainly to take my mind off the car journey that I’m on.  I’m currently on the unpaid part of my sabbatical and we are travelling round South East Asia.  Specifically here, I am on the road between Siam Reap and Phnom Penh.  Whilst we were in New Zealand, I did many high-adrenaline sports and activities, but nothing compares to the excitement of trying to fit a motorbike, a tuk-tuk, a bus and a car (driven by our driver, who is a lovely chap) on to one side of a road, whilst the oncoming traffic consists of a bus being overtaken by a truck.  Still, if you are reading this, I didn’t die.  Actually, maybe just my laptop survived, in which case tell my mother I love her.

Ok, so what have I been doing since the last thrilling instalment of my journey?  I spent another few weeks in Canada, working with OH MY GOD PLEASE DON’T OVERTAKE ON A BLIND BEND [sorry, got a bit distracted] Naoko Ellis.  She is looking at (and  I was occasionally contributing the odd comment to her PhD students on) developing a new chemical looping reforming system, with an iron-based oxygen carrier.  During that time, another 2 PhD students have graduated (congratulations Vivi and Florence), so that makes three I owe dinner to when I get back (Peter Clough passed his viva really early in my trip and is now ensconced in Cranfield as a lecturer in CCS and Clean Energy, working with Ben Anthony).  Other important note from Canada, my wife Pamela returned to the UK for her viva and duly completed her corrections, so we can now do the hilarious “you are two doctors?” thing from Fawlty Towers.  Except I’m a Professor so I win.  I had the opportunity to spend a little time visiting the Carbon Capture and Conversion Institute in Vancouver also, which was lovely and similar in vein to our own PACT facilities.  The institute boasts the capability of generating 1 tonne CO2/day with a sophisticated gas mixing system to condition the flue gas for scaled testing of CO2 capture and conversion devices. Of particular interest was a rig simulating at pilot scale the capture of CO2 using gas hydrates, and of course, a rig demonstrating chemical looping at scale.  I did another couple of lectures, including one to the Master of Engineering Leadership in Clean Energy Engineering at UBC : it was very inspiring to meet and talk to some of the next generation of energy leaders, and a great privilege to be invited. 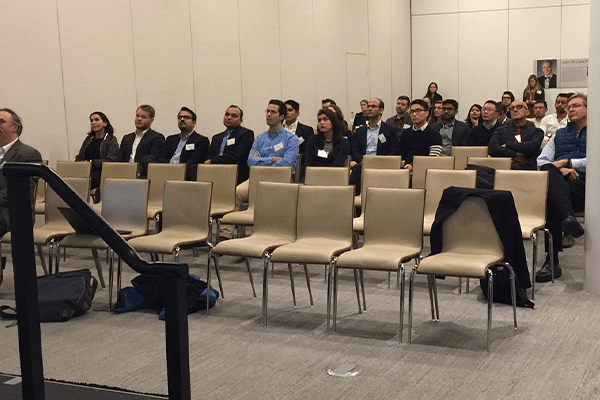 I also gave a talk to the IC alumni society of British Columbia (Many thanks to Stephen Cheung and Nigel Fitzgerald for their hospitality and for helping to organise), at the opulent Fairmont Hotel, and another at the Pacific Energy Innovation Association, which was somewhat marred by the fact I had to get up before dawn, followed google maps instructions, and managed to end up on a multiple lane bridge with no cycle lane on the way to the talk.  I can’t remember if it was raining, but it was in Vancouver in November, so I’m going to say… yes.  Happily, I was not killed, unhappily this was not in any way the last time this has happened to me (more thrilling adventures in traffic coming in Australia).  Thanks to Darlene Clarke for organising, though I now make a habit of asking “this isn’t a breakfast meeting, is it?” before agreeing to give talks.

For those of you (un)fortunate enough to not have heard me speak, here is a TLDR (what’s that? Link for people under 40): “Here’s some more horrific news on the temperatures in the Arctic.  We really need to get a move on doing CCS, including industrial CCS… Here’s some CCS stuff I do (mainly at the moment talking about the EU LEILAC project, with some results from the EU ASCENT project and some general bits and bobs about other advanced CCS research, mainly testing the integration of cement manufacture with CCS, for example this recent UKCCSRC-funded research which looked at integrating the production of cement clinker with Calcium Looping, similar to the aims of the H2020 Cleanker project).  The talk clearly ends with … thanks to my staff and students for doing the hard work, let’s go to the bar.  Oooops – thanks to the EPSRC and the EU for the cash”.  Link to the PEIA talk (we didn’t go to the bar after, it was a bit early).

It was a shock to us all when the three months of the visit came to an end – we had had such fantastic hospitality from Naoko Ellis, John Grace and Jim Lim (together with all of their respective groups) that we were very sad to leave.  I very much enjoyed slotting into the research group meetings, though I am not sure that all of the students will have enjoyed the process quite as much (there may be minor cultural differences between Canada and the UK).  Canadians are so nice, ALL THE TIME and I might not be quite as nice / Canadian.  However,  I did try very hard, and did not have to visit HR for sensitivity re-training, so that was a big bonus.  Joking aside, it was really nice to see a different set of views on chemical looping, in particular from the point of view of rapidly pushing for scale-up, which is frequently less of a stated priority for researchers in the UK and something that we need to improve.

You’ve already had some pretty pictures of Canada in my last blog post, but here’s a picture that indicates well what I’ve been doing in Canada. 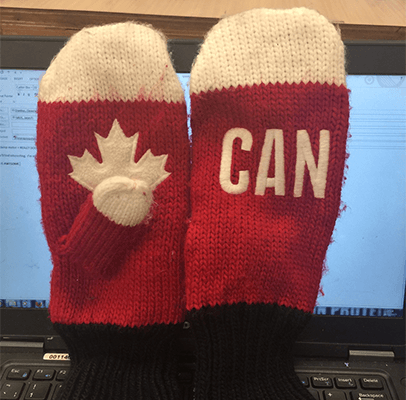 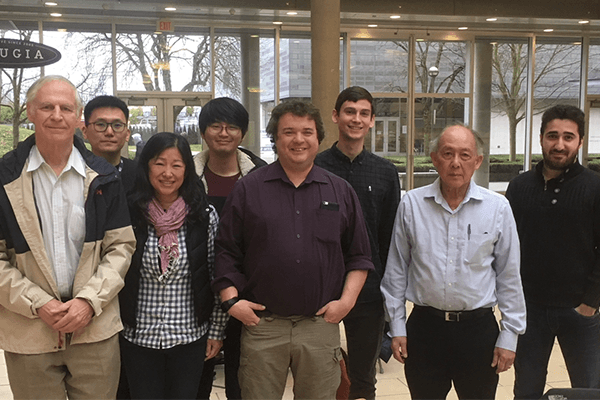 My experience of hosting Paul:

Most days, Paul, having purchased a used bike, would cycle up to UBC campus (up a huge hill) [PSF – in truth, Paul actually put his bike on the front of the bus, but did cycle down the hill, which is pretty much the same, right?] and plonked himself in the coffee room. He would join the research meetings and occasionally interject with comments pertinent to the topic in a very polite manner. I am sure he was exercising the filter most Canadians possess. (Perhaps he would have said things like, “That’s stupid” – had this been back home!!) Nevertheless, his disruptiveness to our all so polite meetings was an eye opener to my students. Thanks, Paul!

On a more serious note, we have discovered similar approaches related to CCUS at a high lever between the UK and Canada. Paul and I talked about the need for low carbon hydrogen and how the technology we are developing can contribute in the future.

And onto my travels…

NO CCS IN THE FOLLOWING SECTION.  IF YOU ARE ONLY IN IT FOR THE CCS, SKIP AHEAD TO AUSTRALIA, which will be in another thrilling post.  NO UTILISATION EITHER, WHICH WILL NOT SURPRISE YOU.

So, after this, it was time to go on to South America.  The fairly epic flight by way of Dallas and Lima ended up with us going from sea level to Cuzco (3400 m) in a super-short time span (well, 24 hours, which did not feel super-short at that time).  Fortunately (TOP TIP) the Canadian GP we visited for our 3rd round of vaccinations prescribed us some anti altitude-sickness medication whilst we were there, and though it was clear that the air was (A LOT) thinner, we just about coped.  Christmas dinner was (hopefully) chicken (it tasted like chicken) and a potato from a roadside seller in Cuzco, but it was then time to move on to Ollantaytambo, from whence we planned the assault on Machu Pichu. 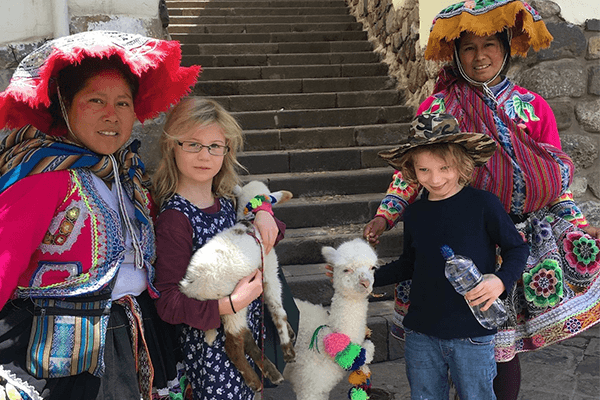 The taxi journey to Ollantaytambo was uneventful but pretty nerve-wracking owing to the large number of trishaws.  For some reason, they are equipped with a headlight but no tail lights, only reflectors, which, given an absence of streetlights made them very hard to spot until the last minute in the dark.  A somewhat perplexed taxi driver knocked on our room door 15 minutes after we arrived, I’d given him a generous tip but I had thought that Pamela had actually paid him… turns out both of us thought the other had paid [Edit: it is cute that I thought that the driving in Peru was scary, now I’ve been in Cambodia].

We caught the first train to Aguas Callientes the next morning, which meant a 4.30am start and much complaining from the kids (and in fairness, the me) on the way to the station in the pitch dark. In Aguas Callientes, we spent time in a couple of different queues for bus tickets to get us up the hill to the complex but finally, armed with some sandwiches and plenty of water we made it there for about 9am!

The actual complex is amazing, though Macchu Pichu was hiding in the fog for the first two hours we were there (we walked up to the sun gate).  However, we saw it peeking out from the clouds just as we got to the sun gate.  Fortunately, Pamela prevented me from continuing down the obviously correct path back to the main site, which turned out to in fact be a three day trek back to Ollantaytambo. 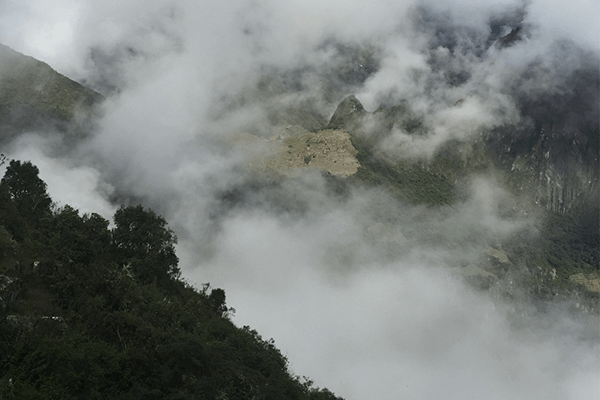 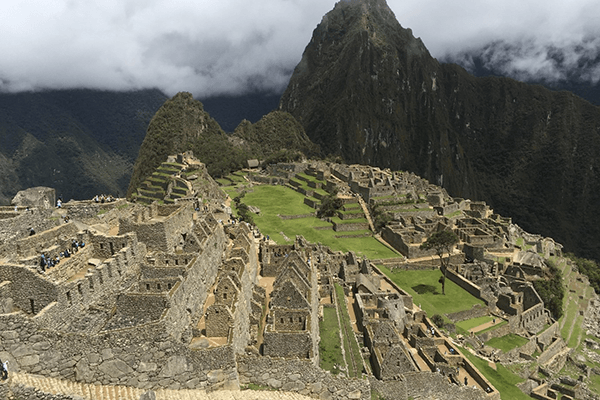 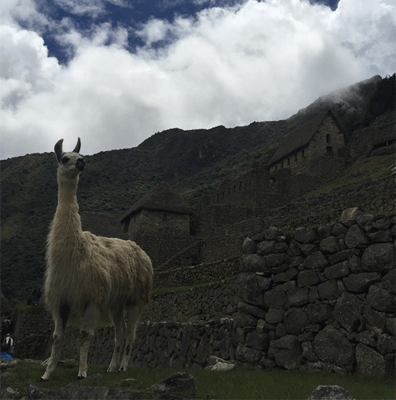 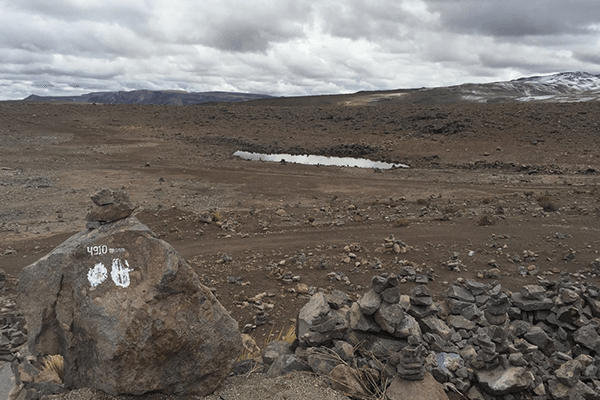 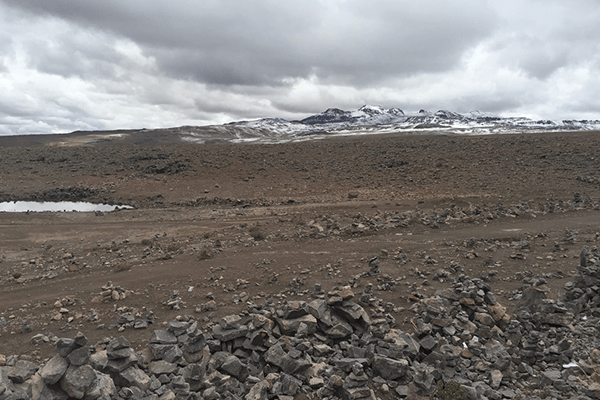 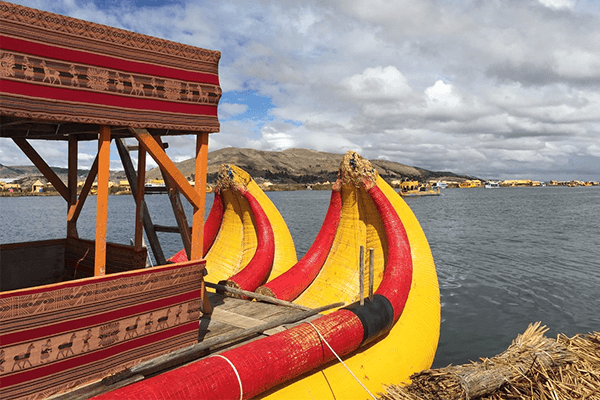 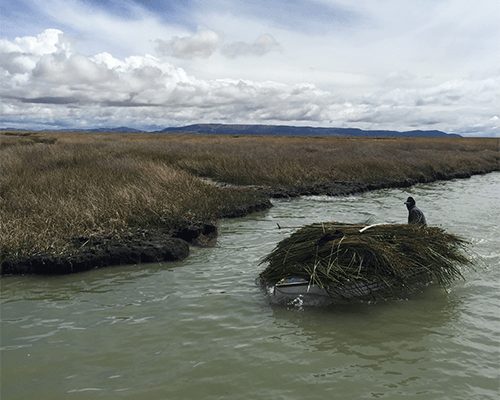 Next we took a bus to the Colca Canyon, one of the world’s deepest canyons.  To get down is a 4 km walk, with 1 km of vertical descent.

Now.  There are three options for exploring the Colca Canyon.  No-one walks down and up in one day with small children.

Can you guess which one the Fennells did? 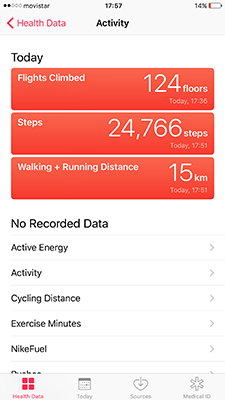 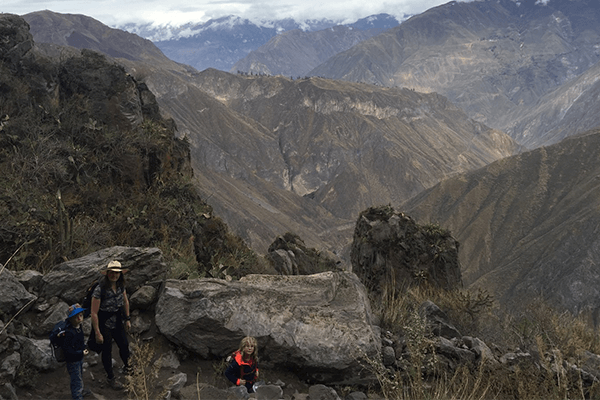 At this stage I was happy to stay behind and take pictures of the intrepid family, rather than stumping behind swearing and muttering about how the mules might be expensive, but that we could totally have afforded them.

The other reason that we went to the Colca Canyon was to see the condors at Mirador, la Cruz del Condor.  We got up (again) at a stupidly early time and caught the first bus up the hill, with all of the ladies who were going to go and set up their equipment.  It turns out that Condors are lazy and don’t start majestically soaring above the canyon till about 10-ish (when our bus was due).  Cue 2 hours of looking at no condors, followed by 15 minutes of looking for Condors whilst worriedly looking out for the bus, followed by 15 minutes of tutting because the bus is late. 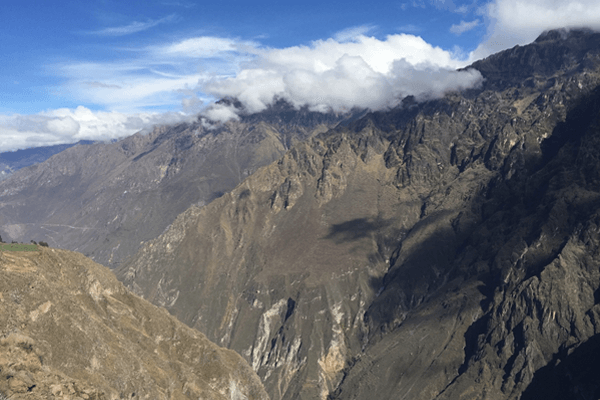 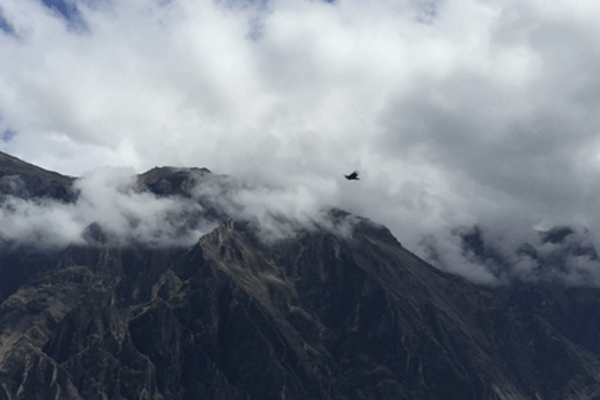 The bus eventually deposited us back in Arequipa.  On the way, we got to go over the incredibly high pass again (yay) and I was, in fact, boring enough to take this picture of a cement plant on the way.  I considered briefly how to fit carbon capture to it.  THAT MAKES THIS A WORK TRIP, RIGHT?  Right? 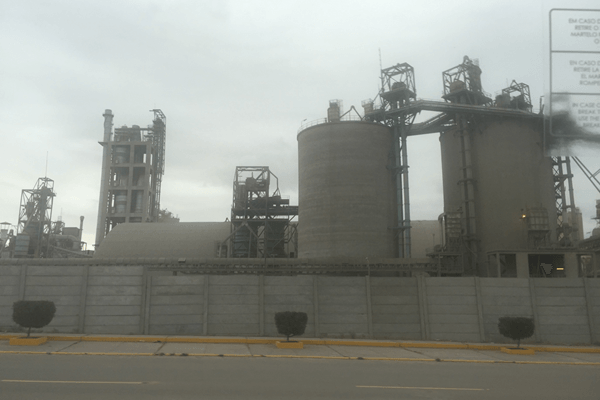 We had New Year’s Eve in Arequipa, followed by wending our way back to Lima.  I can confirm that Peruvians attacked the sky just as fervently as we do in the UK for NYE.

After Lima, it was time to go to Chile and Easter Island, on the way to Australia – where I may have done some actual work again.