This blog was written by Kehinde Fayemiwo who is a PhD student at Loughborough University and received funding to attend the Manchester Biannual Meeting from the UKCCSRC ECR Meeting Fund.

Prof. Nilay Shah, a professor of Process Systems Engineering at Imperial College London, chaired the session on Biomass Energy and CCS (BECCS) and the 2oC target. The first speaker in this session was Prof. Kevin Anderson, Professor of Energy and Climate Change at the University of Manchester and Deputy Director of the Tyndall Centre for Climate Change Research. He spoke on ‘Paris, BECCS and locking out 2oC?’. His talk outlined the climate challenges, such as ocean is warming and acidification, and the scientific proof that this is a result of burning of fossil fuels. He argued that despite progress in the science of climate change, the challenge of the required rate of energy emissions reduction must be acknowledged. He spoke further on the success and failures of the Paris agreement, arguing that the agreement relies on the huge and future uptake of highly speculative negative emissions rather than facing the politically charged and social challenging implications of delivering a meaningful mitigation system. 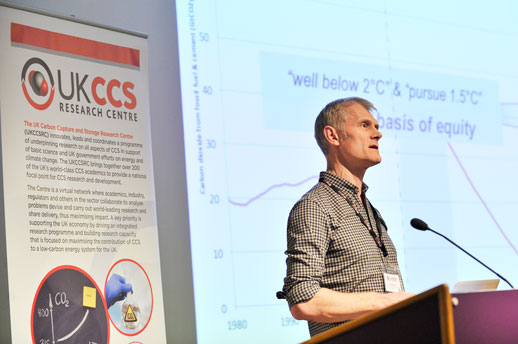 Dr. Amit Bhave of CMCL Innovations gave a techno-economic overview of biomass-based power generation with CO2 capture, storage and utilization technologies. He considered two scenarios. In the first scenario, he presented some results from co-fired solid biomass for power generation and CO2 capture. He applied a toolkit known as CMCL’s MoDS to performed global sensitivity of CO2 capture and utilization. The second scenario showed the process involved in the production of algae-derived syngas via a dual fluidized bed gasifiers. Thus, he concluded that the results presented can help to benchmark gasification against other algae conversion in terms of process efficiency, feasibility and environmental impact. 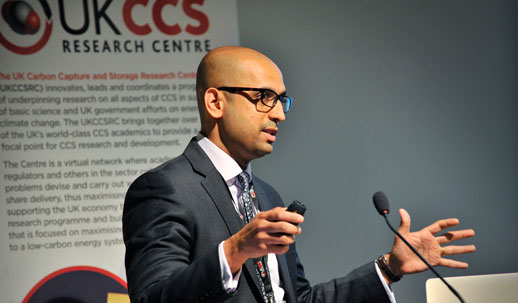 As a first-time attendee at a UKCCSRC Biannual Meeting, it was a great privilege for me to meet with other researchers and get updated on the CCS progress so far, and and I found the meeting both motivating and enjoyable.