An Update from the CO2 Transport and Storage Meeting

Rachel Kilgallon is an ECR at the University of Edinburgh with a PhD in the role of chemical and geochemical tracers for CO2 transport and storage. As part of the ECR meeting fund, she attended the UKCCSRC workshop: Flow and Transport for CO2 Storage on 29–30 October 2015. 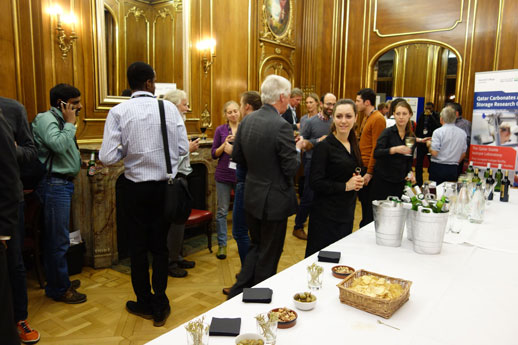 For two days, the Qatar Carbonates and Carbon Storage Research Centre at Imperial College London hosted a technical meeting to discuss the flow and transport of CO2 during storage. With an attendance of over 50 individuals, the assortment of presentations provided a platform to scrutinise our understanding of the migration and trapping of CO2 injected in storage sites.

The session opened with a presentation from Prof. Martin Blunt, Imperial College London, demonstrating the impressive scale and detail provided by the equipment at the centre. The experimental layout is capable of imaging the network geometry connecting pore spaces. Martin used this information to exhibit the dynamic nature of fluid processes at the pore scale. Outputs from the results include the ability to physically identify contact angles in situ. Dissolution regimes in modelled carbonates were well matched to experimentally derived results. What was evident from his presentation was the complicated nature of supposedly homogenous units. Other interesting portions of work described looked at connected pathways and ganglia flow. Furthermore, trends show distal snap-off for CO2 bursts away from the bulk flow of direction.

Tony Espie, BP, was up next and highlighted the need to understand the parameters involved during CO2 injection; this included understanding the capacity, injectivity and well integrity constraints. In addition to this, Tony emphasised the need to define what counted as the area of influence when CO2 is being injected. On a similar note to Martin, Tony warned that important details can be lost in the upscale of a system and that the long term fate of CO2 can be a problem for computational models. Tony noted that Prudhoe Bay field in North Slope, Alaska contains natural gas that is 12% CO2 enriched. BP is currently proposing the use of this extracted CO2 to be made available for oil recovery in the area as part of the Alaska LNG Project. Tony also raised the issue of IPCC model trapping mechanisms and if they relate to real storage locations. Sleipner was a popular point of discussion throughout the two days. Tony mentioned the worked carried out there in terms of modelling and monitoring. Some key observations included that geological complexity dominates in buoyancy influenced plumes but that gas/low viscosity injection may be difficult to model. Pressure wave propagation is an important factor to be evaluated – with surface deformation versus injection volumes. As injection occurs, there may be significant changes in pore pressure close to the injection site. This pressure then diffuses away from the site with time. The pressure changes may not be fully established for periods of weeks etc.

With the discussion leaning towards Sleipner, it was extremely beneficial to have Andrew Cavanagh, Statoil, in attendance to discuss 20 years of Statoil storage experience. With a hat tip to Goldilocks and the Three Bears, Statoil have injected into Sleipner (and will do until 2020), a formation with a sandstone permeability of 2D and 200m. We know from Sleipner that CO2 is feasible for storage and was applied to In Salah, however, monitoring was limited by a legacy baseline. 4 million tonnes of CO2 was injected at In Salah, with a formation thickness of 20m with a 2mD permeability. In 2008, Statoil transitioned to Snohvit, a 100m thick formation with a 200mD permeability (just about right!). Monitoring knowledge from In Salah was applied to Snovhit, making sure not to exceed the geomechanical limit. However, Andrew highlighted that they are all extremely heterogeneous.

Simulations from Sleipner using a two phase black oil model show that the plume is gravity dominated and favours equilibrium at every observation point, suggesting redistribution of CO2 plumes as injection ceases. This implies that without calibration and correction, reservoir simulations are highly likely to be misleading with respect to CO2 storage. Despite using seismic, gravity, seafloor surveying and mapping at Sleipner, an added bonus of downhole monitoring would vastly improve models.

Catriona Reynolds, Imperial College London, gave a presentation that complimented the opening talk given by Martin. From her PhD, she introduced methods of observing flow behaviour for gas injection with particular examples for mixtures of CO2-brine and N2-water. The results were presented at a core scale and pore scale. Results highlight that the spatial distribution of fluids in the pore space is the primary control on CO2 relative permeability, and that the importance of spatial heterogeneity in rock properties such as capillarity, porosity and permeability on fluid distributions is controlled by viscous forces. During capillary dominated core flooding, the relative permeability is sensitive to flow rate and viscosity. An additional observation on the pore scale included dynamic connectivity in the form of connection and disconnection events that control the CO2 relative permeability.

Mark Hesse, University of Texas, gave an overview on the long term safety of geological CO2 storage. This work focused on Bravo Dome, the well known natural CO2 reservoir in New Mexico. Again, the IPCC trapping mechanism figure was highlighted as inappropriate for the timescales involved, opting to constrain trapping rates at Bravo Dome using field observations. The area of Bravo Dome equates to the central part of London and is a volcanic origin gas reserve of 22 tcf (~10 tcf in literature). Bravo Dome is not short of field data, with over 788 wells, 3645 permeability and porosity measurements and 40 2D seismic lines. The method of trapping is primarily structural with 20% solubility trapping. The mass of CO2 dissolved at Bravo Dome is 366 ± 122 Mt CO2, ~ 65 years of emissions from US coal power plant. A high capillary entry pressure prevents CO2 entering the siltstone. Thus, CO2 must only be entering the sand bodies and the silt bodies contain brine. Another interesting feature of the Bravo Dome shown by Mark is the presence of pressure gradients. Pressure values of 3 MPa in the eastern end but ~14 MPa in the west side. It appears that the pressure has not relaxed due to the presence of compartments based on stratigraphic controls. Additionally, there appears to be regional underpressure due to the presence of evaporates (hydrostatic levels).

Following an evening of engrossing conversation over a delicious dinner (and a few hours of sleep), we were ready for another day of fascinating presentations. Jerome Neufeld, University of Cambridge, was first up and gave an interesting talk on monitoring and modelling the flow and dissolution of geological stored CO2. The work studies the pressure dissipation in a porous medium bounded by a thin layer of much lower permeability. The presentation focused on modelling and monitoring dissolution with Sleipner as a prime example. In addition, the research examines propagation and mixing during the dissolution regime. The mixing occurs because the density of brine increases due to the dissolution of CO2, creating an unstable layer of dense brine below the CO2 plume. This layer may induce vertical, density driven convective flow in ‘fingers’.

Prof. Stuart Haszeldine, University of Edinburgh, emphasised the incentive of using CO2 in EOR. With the main summation, that it speeds up the pathway to implementing CCS and enhances storage performance. Gareth Johnson, University of Edinburgh, exhibited example CO2 EOR projects to highlight how trapping is not the same in different injection cases – again showing how the IPCC diagram is not suitable for all cases. An example presented was the Pembina Cardium CO2 pilot project. At this site, CO2 injection commenced in spring 2005 and ended early in 2010 during which geochemical and isotopic monitoring was carried out. Trapping mechanisms for the system suggested CO2 partitioning – 76% free phase, 24% solubility trapped with agreement from isotope data.

Chris MacMinn, University of Oxford, further expanded on the migration of CO2 through layered sedimentary sequences. His work mentioned that solubility trapping is carried out by density driven convection but at a larger scale, it is not effective enough for trapping. A mixture of solubility trapping and residual is needed when looking at trapping over time versus distance.

Jeroen Snippe, Shell, gave a captivating presentation on the multiphase flow modelling of calcite solution patterns from core scale to reservoir scale. Models show ‘wormholing’ for CO2-saturated brine injection but was also interested in gas/scCO2 injection. These models are important for determining the impact of gas phase and upscaling to field scale. Experimental results at the core scale showed that an increase in flow rate moves from wormhole to uniform dissolution and can be replicated using modelling software. When comparing a single phase or a two phase injection, there is a delay in wormhole growth from single phase to two phase CO2 brine injection as the gas phase slightly suppresses the wormhole flow velocity. Effective model predicts wormhole can be significant in carbonate reservoirs on operation scales for CO2 and water co-injection (days to years). Effective models predict negligible wormhole formation for pure CO2 injection (core to reservoir scale) – there is only a thin region in which conditions are favourable for wormhole growth.

The final talk of the technical meeting came from Andy Chadwick, BGS, who also remarked on the late flowing of mobile CO2 at Sleipner. In addition, he highlighted that the CO2 is close to critical point at Sleipner due to the shallow nature of the site and as a result is very sensitive to any pressure and temperature changes. Concerning the migration of the CO2, he concluded that it needs semi permeable mudstones and a gas chimney for CO2 migration observations to work, leading to adiabatic pressure reduction as CO2 rises in reservoir

To top off two very interesting days of discussion, Catriona was kind enough to show a group around the lab facilities. Although we interrupted some PhD students hard at work, we were available to view the X-ray imaging laboratory that can record coreflooding under reservoir conditions. Depending on the level of detail required, the sample can be imaged using a μCT scanner or a medical grade scanner. This equipment layout has the ability to image the pore space of a rock and fluids at 10nm to micron resolution. This type of digital rock analysis proves to be a necessary compliment and input to a field scale geological model.

Many thanks to the Qatar Carbonates and Carbon Storage Research Centre at Imperial College London for hosting us!