I am Alasdair Bruce, now a 4th year Ph.D. student at the University of Edinburgh. I would most like to thank and greatly acknowledge the UKCCSRC for funding my visit to the UK-China (Guangdong) CCUS Centre and providing me with this fantastic opportunity. My 4-week exchange was immensely beneficial to my research and understanding of CCUS in China. Read about Alasdair’s 1st week here.

On Monday and Tuesday, I worked with TieJun on a number of CCUS Centre activities. We discussed the recent Expression of Interest document that was sent to potential venders and tenders and drafted a number of letters. In addition, I continued researching the China Southern Power Grid to understand the evolving demand for electricity and CO2 emissions. As Guangdong imports a large proportion of its fuel and electricity from other provinces, it became apparent that it would be difficult to model the Guangdong electricity in isolation. In addition, acquiring data would prove problematic but I continued to evaluate Guangdong’s generation mix and expected capacity additions by reading many reports and China’s 12th 5-Year Plan (2011-2015). 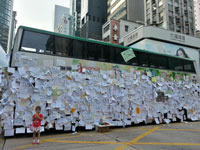 On the Chinese National Day (Wednesday 1st of October) a long 7-day public holiday begins where all state-owned companies close. Without a working environment in Guangdong for the public holiday, I visited a friend at the Chinese University of Hong Kong and used the public space to continue computer-based research. However, the atmosphere in Hong Kong was very volatile. Demonstrators had occupied many business districts throughout the city, including Mong Kok, the area I stayed when in Hong Kong. Mong Kok has an extremely high population density of 130,000/km2 making it the busiest district in the world. 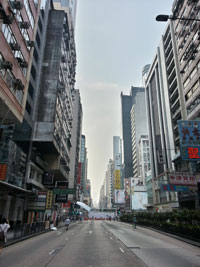 During my short stay in Hong Kong, I visited various places when I was not studying at the Chinese University of Hong Kong. In Tsim Sha Tsui, I went to see the Tsim Sha Tsui Clock Tower, the Avenue of Stars, Signal Hill Garden & Blackhead Point Tower, Kowloon Park, and the Hong Kong Museum of History. I visited several markets at night including the Ladies’ Market in Mong Kok and the Temple Street Night Market in Yau Ma Tei. In Central, I visited Victoria Peak; the Peak Tram; and Pollock’s Path, the world’s most expensive street, with an average price of USD $120,000/m2. I also visited the Hong Kong Zoological & Botanical Gardens; Statue Square; Edinburgh Place; the HSBC Building; and the Bank of China Tower, with a public observation deck on the 43rd floor. 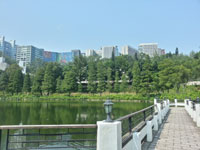 In Admiralty, I visited Hong Kong Park and in Causeway Bay I went to Russel Street, one of the most busy and commercial shopping streets in Hong Kong and named the most expensive in the world; and Jardine’s Bazaar, named after William Jardine, a graduate of the University of Edinburgh and co-founder of Jardine, Matheson and Company.