An ECR at the UKCCSRC GEOPHYSICAL MODELLING FOR CO2 STORAGE, MONITORING AND APPRAISAL Meeting

This blog was written by Juan Alcalde, an Early Career Researcher from Aberdeen University, that was granted funding by the UKCCSRC’s ECR Meeting Fund to attend the Geophysical Modelling for CO2 Storage, Monitoring and Apprasal Meeting.

The meeting, hosted by the University of Leeds, was held in an intimate atmosphere, with around 30 researchers from different disciplines sharing their thoughts about the state of the art modelling and monitoring with geophysical methods. A meeting with such a reduced group of speakers and audience provides a unique opportunity for an ECR: one can easily ask questions, meet other researchers (the omnipresent “networking”!) etc. Plus, the catering was fantastic, 10/10!

The talks were all very exciting and inspiring, and the high quality science flowed throughout the venue. In this post I will talk about the three talks that I considered most stimulating; two from international speakers and one from the host University. 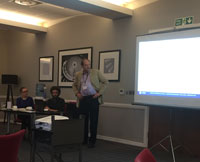 All the way from sunny California to the fog in Leeds, the first talk of the international session was given by Dr. Johnny Rutqvist (Lawrence Berkeley National Laboratory). Dr. Rutqvist and his group use a multiphase fluid flow simulator, combined with geomechanics to calculate reservoir properties (e.g. permeability) and model fault reactivation and leakage. His models suggest that seismic events higher than magnitude 4 are not expected, but these are already a human concern. He also introduced the case study of In-Salah (Algeria), and offered a nice explanation (tensile opening!) for the double-lobe uplift observed at its surface, linking neatly a complex subsurface process with a surface observation.

From California to Trondheim, the second talk of the session was given by Dr. Andrew Cavanagh (Statoil Research). Dr. Cavanagh talked about the Statoil experience on CCS, provoking admiration in the audience (and a twinge of envy!). The three projects covered by the talk were Snovit, In-Salah and the jewel in the crown, Sleipner, which has been running for almost 20 years now. These areas were covered in almost all the rest of the talks, since they represent some of the most advanced datasets on CO2 storage worldwide. In Sleipner, the reservoir modelling has allowed identifying gravity dominated percolating flow as the most probable migration mechanism in Sleipner, although further analysis has to be carried out in order to understand how CO2 actually moves in the subsurface.

Finally, Dr. Quentin Fisher (University of Leeds) gave an energetic presentation on fluid flow, geomechanics and geophysical modelling. He spent a great part of his talk discussing knowledge gaps and challenges that the research community should tackle. It was very refreshing listening to an experienced scientist giving his point of view on where scientific efforts should be oriented. I found his talk very inspiring.

The cherry on top was the poster session, in which the poster presented by Laurence Cowton (University of Cambridge) won the ECR prize. Congratulations Laurence, and good luck next time for the rest of the presenters!