An ECR at the Flow and Transport for CO2 Storage Meeting

This blog was written by Hayley Vosper from BGS, whose attendance at the UKCCSRC meeting on Flow and Transport for CO2 Storage was supported by the ECR Meeting Fund. This meeting was hosted by QCCSRC at Imperial College, London.

I signed up for this meeting as someone who is involved in the modelling of CO2 storage primarily to get an update on the current research topics in the area. I was interested to see what techniques are used to integrate complex pore and core scale processes into reservoir scale simulations. 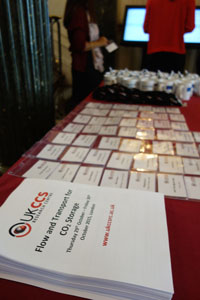 The meeting covered flow and transport aspects of modelling for CO2 storage across the whole range of length scales, from pore-scale analysis up to full reservoir simulation. There were a number of insightful talks, each followed by detailed and helpful questions throughout the two days of the meeting and the opportunity of a guided tour of a state of the art laboratory on the final afternoon.

Updates on modelling of the Sleipner plume are always interesting to me. It is such a good case study with lots of seismic data available to map the flow of the CO2 but significant challenges in producing a simulation which matches the data. Both traditional and unconventional methods were discussed and it was encouraging to see significant progress being made towards replicating the shape of the top layer. We also discussed different modelling techniques on other case studies including In Salah, Bravo Dome and the Pembina field.

One area which I am not very familiar with is pore scale modelling and data acquisition. In the meeting we heard about and discussed the scanning of core and micro-core samples using CT, micro CT and x-ray microscope technology, and from these observations models of the pore space were created. The pore space is extremely complicated and seeing the pathways for CO2 change with time made me wonder how these processes are ever modelled! But we were given some good insights.

The famous IPCC diagram on trapping mechanisms became a theme of the event with various studies producing more precise versions for particular case studies. One trend observed was that dissolution trapping played a smaller role than previously anticipated, often due to the presence of shale layers which prevent convection.

Overall this meeting was helpful to me as an early career researcher to build my background knowledge of relevant areas and also, as a specialised meeting, it provided a depth to the discussion on focussed topics which was challenging and at the forefront of the science.