A meeting was held at the University of Oxford on Thursday 26 and Friday 27 June to discuss alternative carbon capture and storage methods. The meeting, organised by UKCCSRC and co-ordinated by Prof Ben Anthony (Cranfield University) and Tim Kruger (Oxford Martin School), brought together leading academics, research council funders and policymakers to explore opening up the space beyond ‘conventional’ CCS. 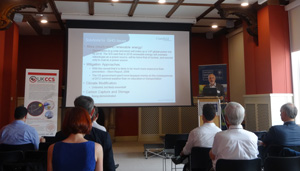 The meeting was opened by Ben Anthony, who introduced the first keynote speaker, Prof Klaus Lackner (Columbia University). He noted that while capturing CO2 from flue gases, purifying it and sequestering it in geological formations was necessary – indeed essential – to avoid dangerous climate change, it was insufficient. He argued that it will be necessary to go beyond just reducing emissions by capturing CO2 from large stationary sources and that eventually we will need to actively remove CO2 from ambient air. He noted that while capturing CO2 from ambient air will necessarily require more energy than from a flue gas, the energy requirement was a log function of the concentration and thus energy considerations did not necessarily provide an insuperable barrier.

He was followed by Prof Richard Darton (University of Oxford), who cautioned on the scale of the challenges faced by CCS – in terms of volumes that would need to be sequestered and in terms of societal acceptance. He observed that given the uncertainties relating to both these aspects, it would be wise to also consider alternative means of capturing and storing CO2, especially as ‘negative emissions’ (proposed technologies that remove CO2 from ambient air) are assumed by the IPCC’s Representative Concentration Pathway models at a massive scale.

Dr Louis-Cesar Pasquier (INRS Quebec) presented on his work on mineral carbonation. He described how it was possible to carbonate tailings from the mining of serpentine and generate value from the resulting products. He presented results of experiments and modelling studies that indicated that this could be a value-additive means of scrubbing CO2 from flue gases. 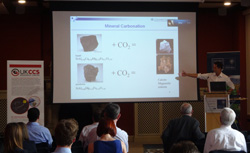 Dr Juerg Matter (Southampton University) and Prof Alissa Park (Columbia University) presented together (Prof Park via Skype) on their work on both in-situ and ex-situ mineralisation. They described the CarbFix experiments underway in Iceland and how the use of 14°C in the injection gas was used to verify the permanent sequestration of CO2 by means of carbonation of basalt. They also talked about the Carbon Capture Utilisation and Storage Network that Prof Parks was coordinating and the role it had in broadening the field from just conventional CCS.

Prof Ros Rickaby (University of Oxford) then gave a talk about the evidence for ocean sequestration of carbon in the paleo climate record. This was pertinent to some of the approaches discussed later in the meeting which envision increasing the capacity of the oceans to store carbon by adding alkaline materials to them.

Michael Priestnall (Cambridge Carbon Capture) presented on a method of generating magnesium oxide by alkaline digestion of olivine. This magnesium oxide could then be used to either strip CO2 from flue gases or used as a means of enhancing the capacity of the oceans to draw down CO2.

Dr Greg Rau (University of California Santa Cruz) gave the second keynote. He described his work on Accelerated Weathering of Limestone (AWL) which results in CO2 being stored in seawater as bicarbonate ions buffered by increasing Ca2+ concentration. He also called for research to be broadened from conventional CCS to methods that store carbon via mineral carbonation and ocean alkalinity enhancement.

Dr Phil Renforth (Cardiff University) discussed the experimental results from his bench-top scale AWL reactor, which he has used to examine the kinetics of the component reactions of AWL. Using this data he is constructing a model to assess the energy requirements and capital costs of scaling up the process to 1MT CO2 per year.

Dr Lidija Siller (Newcastle University) rounded off the day describing her work on using nickel to catalyse the hydration of CO2 – one of the component reactions of AWL and one which is often the rate-limiting step. 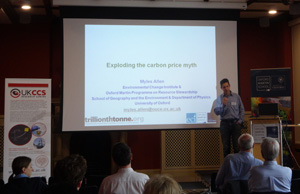 The following day, after a brief recap by Tim Kruger (Oxford Martin School), Prof Myles Allen (University of Oxford) spoke on the need for emitters to be obligated to sequester a growing proportion of the CO2 they produce, and how ultimately this proportion would need to grow to 100%. This would necessarily require not only CCS, but means of drawing CO2 from the air.

Dr Paul Fennell (Imperial College London) gave a techno-economic analysis of combining biomass energy, CCS and ocean alkalinity enhancement and concluded that this could provide a means of generating electricity in a way that was overall carbon-negative.

Mischa Werner (ETH Zurich) described his work on a method of direct flue gas CO2 mineralisation of serpentine. His experiments demonstrate that it is possible to carbonate at temperature of less than 100°C and at less than 1bar pCO2

The final talk was given by Dr Niall Mac Dowell (Imperial College London) who examined the optimisation of an AWL process at different pCO2, by comparing the energy penalty involved in oxy-combustion with post-combustion purification of flue gas.

The meeting concluded with a discussion about the direct of research and development in this field and consensus agreement that the scope of research needed to be broadened to explore further alternative methods of CCS.

The participants greatly enjoyed the meeting and as the second in a series of meetings (the first being on Direct Air Capture back in March 2014) to explore the various complimentary strategies to carbon capture and storage, there were many animated discussions about the potential of these alternative approaches. There was a consensus that there needed to be a broadening of research to include such alternative approaches, as it was agreed that even if conventional CCS were to work as well as hoped, it would not be sufficient to address the challenge of climate change – other, alternative methods of CCS, which could remove CO2 from the atmosphere will also be required.

As the opportunity presents itself and technologies develop it is the intention of UKCCSRC to share learning and enhance knowledge exchange so that experts and interested parties in the UK are provided with the state of the art in these areas, and have a clear idea of where significant breakthroughs are likely to occur.  It is hoped that by holding regular meetings these technologies will be advanced and fora created for interested parties in the UK and elsewhere in these areas. 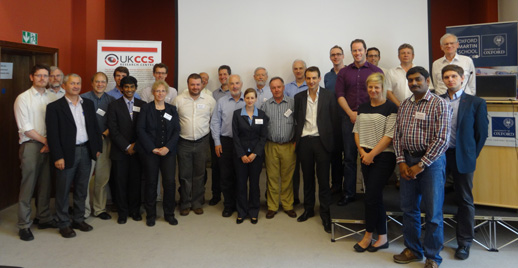