I am an environmental sociologist with a particular interest in offshore carbon dioxide storage, who likes going out into the field and doing empirical research. Whilst you could argue I’ve certainly managed to find a niche to corner, it also does rather narrow down the range of case studies I can choose from. There are a small number of CO2 storage sites globally, but only a few of these are sub-sea. Quite a lot of storage sites also happen to be a fair distance away from sites of population, which – whilst not negating social issues – does rather limit the amount of social science research one can do ‘on site’.

There is hence probably only one place in the world, right now, that ticks all the boxes for the kind of research I want to do: Tomakomai. A sprawling port town on the north Japanese island of Hokkaido, Tomakomai is hosting Japan’s first integrated large-scale CCS demonstration. With injection commencing in spring 2016, this was an ideal opportunity to study the societal dynamics of CO2 storage in action. Injecting 3km away from a town of 170,000 people, under a sea that is also home to the surf clams of which Tomakomai’s fishers are so fiercely proud, in a country all too familiar with the risks of seismic activity. If the Tomakomai project operators are able to demonstrate they can inject, store and monitor CO2 competently, there must be a lot to learn for CCS projects globally. 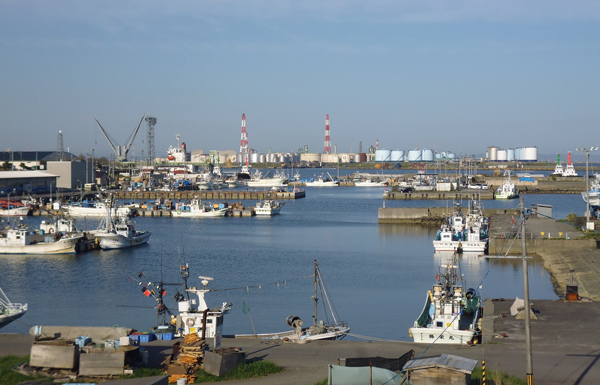 Partnering up with the Research Institute of Innovative Technology for the Earth (RITE) in Kyoto, myself and Co-I Jun Kita were fortunate enough to receive funding from the UKCCSRC International Research Collaboration Fund. This allowed me to travel to Japan for two months between April and June to undertake empirical social science research on CCS in Japan. This built on a scoping study I did in Tomakomai in 2014 as part of a Japan Foundation Fellowship, and the aim this time was to build a serious dataset from which publishable research could be produced.

I won’t cover everything I did in the two months, suffice to say I started working as soon as I got off the plane – going straight from Narita Airport to AIST in Tsukuba, where I gave a seminar to the Marine Environment Research Group (they of QICS fame) – and didn’t really stop until the day before my flight out of Japan. In-between I went to Tokyo to interview academics and stakeholders, Sapporo to run a UK-Japan environmental sociology workshop, Tomakomai itself to do fieldwork (more about that in a second), and Kyoto to process my data in RITE’s offices. In this post, though, I’ll focus on two aspects of this journey: the town of Tomakomai itself; and collaboration across disciplines and cultures.

My funding included provision for three weeks of fieldwork in Tomakomai. This meant, more or less, that I was staying in Tomakomai for the best part of a month. Now, while I am not an anthropologist whose research involves going and living in far-flung parts of the world for years on end, I do believe we need to pay more attention to the history and context of the places in which CO2 storage is going to happen. In this regard, being able to spend a good bit of time in the town rather than rushing in, doing interviews and rushing out again turned out to be a very fruitful strategy. I became very well acquainted with the town library, reading old newspapers, looking at environmental impact assessments for previous infrastructure projects, and poring over municipal government documents. Tomakomai has a long history of industrial development, starting with paper manufacturing in the early 20th Century and continuing with the establishment of an oil refinery in the 1970s. All of this background information helped to flesh out the point that the stakeholders I spoke with were making in their interviews, and is building up a rich narrative of the community’s relationship with energy and infrastructure that I very much look forward to exploring as I delve into the data and write it up over the coming months. 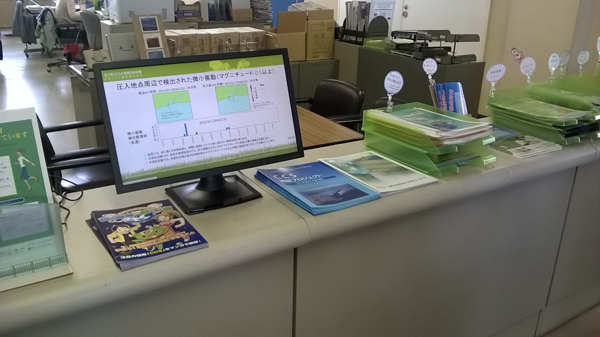 More practically, when you stay in a place like Tomakomai for an extended period of time, people start to remember you. Soon after arriving I went into O-Uchi Café, the only place in town which does a decent flat white (I know I’m not helping the social science stereotypes here but bear with me, there is a point to this). The owner remembered me – and my research into low-carbon energy – from my previous visit in 2014. She had been reading my blog in the interim too. This made me think about the impact that not only a CCS project but also CCS research has on a community, and what we as researchers can do to leave a positive impression behind us. I adopted a policy of using local businesses wherever possible, and of talking to people openly if they asked what I was doing in town and what my research was about. This is something I would very much encourage other CCS researchers to do – it might not be a large-scale economic impact, but by pro-actively supporting independent hotels, restaurants, cafes, laundries and the rest when we go to do fieldwork (whether it’s social science research, marine sampling, lab work on-site or whatever) we are at least ensuring some of our research money benefits the local community. Hopefully, by extension, this can help to build goodwill towards CCS at the same time.

Goodwill is what leads me onto the second point I want to make: inter-cultural and inter-disciplinary collaboration. A key plank of our project was to build understanding across disciplines. Jun Kita came with me to Hokkaido for a week to join in some of my research. Namely, supporting me with some of the interviews in Tomakomai; helping me find the right books in the town library; and presenting alongside me at a UK-Japan Environmental Governance workshop at Hokkaido University. What made this work so well was that Jun was a fantastic collaborator. He didn’t just present at the sociology workshop – he asked the participating sociologists questions about engagement with fishers and management of marine species. He took furious notes during our interview sessions. And he managed to unearth a book in Tomakomai City Library cataloguing the complete history of fishing in the town and its relation to environmental pollution (laugh all you want, but that data is going to be very useful when it comes to writing up). 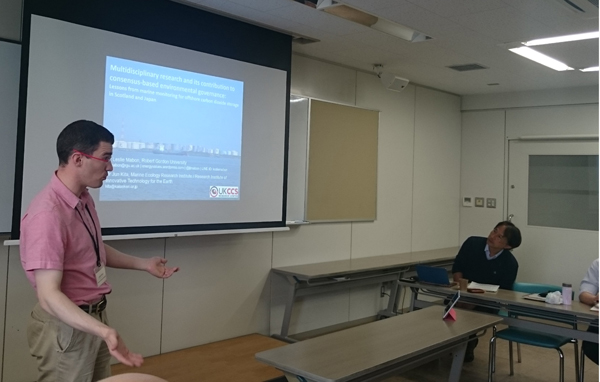 By return, at RITE in Kyoto I sat with the geologists, went to their seminars, and had them explain seismic charts to me. I got to experience what it was like being part of a Japanese research group. The working day was divided up by chimes in the office, which played four times a day – at 9am to signify the start of work, at 12 noon for the start of lunch, at 1pm for the end of lunch, and at 5.30pm for the end of work. When someone joined or left the group, they stood up in front of everyone and gave a short speech. If you went away for research or a conference you brought back sweets, which were put on a shelf for everyone to eat. My contribution, a box Tunnock’s Tea Cakes and a box of Caramel Wafers, were put out at 2pm and devoured by 11am the next morning. As a social scientist such things are fascinating in their own right. But being able to go and spend a prolonged period of time with the RITE team taught me an awful lot about how science gets ‘done’ in different cultural contexts, and the importance of understanding these differences (and similarities) when developing international collaboration. 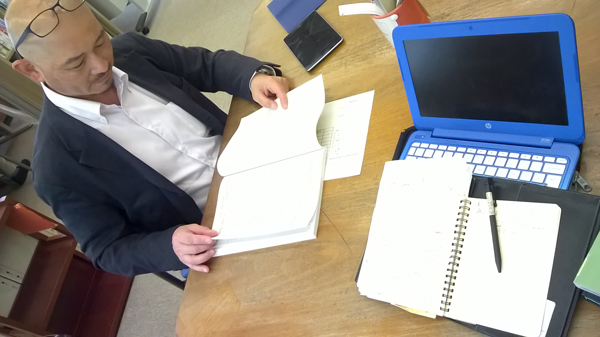 By the same token, I was exceedingly well looked-after. My name got added to the staff list – レズリー. A group of CO2 storage scientists took me under their wing at lunchtimes, where we went to the canteen of a big electronics company across the road. This became such a thing that another two RITE researchers from a different group, who I saw at lunch every day but had no idea who they were or what they did, came to my farewell party (I discovered they were from the very famous and successful Systems Analysis Group). My conversational Japanese had improved no end by the time the project had come to an end, because I was talking to people socially as well as for research purposes. 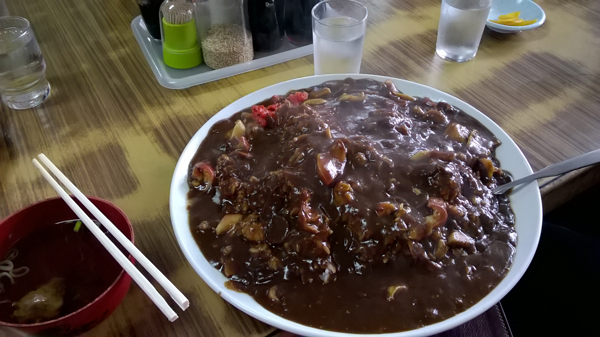 The reason I tell you all of this is that I don’t think we give enough thought in academia to inter-personal relations when it comes to interdisciplinary or cross-cultural research. What made this project work was that everyone got on well together on a personal level – which in turn made a lot of space and time for the negotiation, patience and understanding interdisciplinary work inevitably requires. As Japan’s first integrated large-scale CCS project develops, I’d like to hope more and more UK-based researchers will be able to collaborate with their Japanese counterparts – and perhaps even experience the surf clam curry and haskap tea-fuelled world of Tomakomai for themselves.

Leslie’s Guide to Tomakomai is online on his blog