On Wednesday 18th June, 25 carbon capture and storage (CCS) early career researchers (ECRs) from across Northern Europe convened in Rotterdam to strengthen the European ECR network, to learn more about the Netherlands’ CCS ambitions, and to produce The First Declaration of Amsterdam (more on that later). The meeting was organised by CATO-2, and travel funding assistance was provided to UK ECRs by UKCCSRC as part of the RCUK Energy Programme. 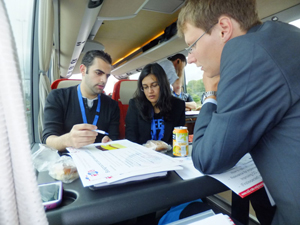 An overnight stay for the UK ECRs in a quaint floating hotel boat in Oosterdok, Amsterdam, hinted that what can be done on land can also be done at sea, just like CCS. Food for thought as we were bussed down to the Rotterdam Harbour area with our fellow North Sea ECRs. On the way we were split into small groups of 3-4 people, and over the couple of hours spent on the buses, we presented and discussed our research to our groups in short slots of 15 minute or so. It was a great way to break barriers between researchers of different disciplines. Being given the opportunity to talk with others about research unrelated to your own, whether it be capture, transport, storage, planning or public acceptance, made for an enlightening journey. The small-group discussions made it possible to ask questions and to gain a much better understanding of the topics compared with what formal lectures might offer.

After this we were set the task of jotting down ideas for the content of our Declaration. The First Declaration of Amsterdam was intended to make a statement to CCS stakeholders that North Sea young/early career researchers are a vital part of advancing CCS, both now and in the future. On this theme, we were asked to come up with ideas which expressed why CCS is important, broadly where we expect progress to be made, and what we will commit ourselves to in the future as ECRs. 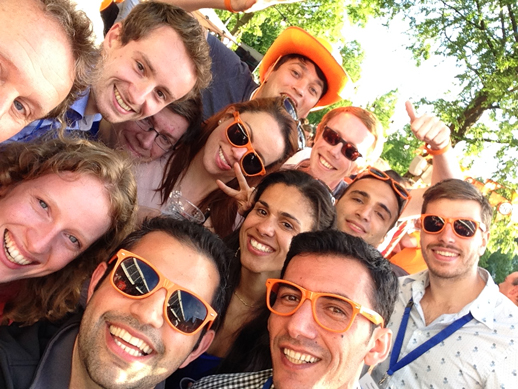 Job done on coming up with some ideas for the Declaration, we arrived at Futureland Information Centre at Maasvlakte 2, a brand new 2,000 hectare extension of the Rotterdam harbour area. After a much needed coffee, here we were treated to three excellent presentations from Ashna Raghoebarsing (Policy Advisor for the Dutch Ministry of Economic Affairs), Niels Berghout (Researcher at Utrecht University) and Marc Kambrink (ROAD).

Ashna gave an overview of the Dutch government’s stance on energy provision, and stressed the importance of CCS if the Netherlands are to meet their carbon reduction targets. An important point stressed was that the government was looking for the most cost-effective way of maintaining energy security while mitigating climate change; an important consideration which may ultimately dictate global CCS uptake.

Niels gave a very interesting talk on capturing CO2 in industrial network configurations, and demonstrated the potential economic benefits of centralising CO2 capture units. He stressed his idea for ‘One North Sea Vision’ with all the countries around the North Sea needing to realise the importance and benefits of joint ventures and our common natural resource.

Finally, Marc, who is in charge of public communications at the ROAD project gave a detailed presentation highlighting the importance of demonstration projects in building knowledge and experience, and proving the feasibility of industrial scale CO2 capture and storage.

Lunch was then taken on board a boat tour of the new port at Maasvalkte, which was very impressive although I think most of us lost track of the volumes and areas of sand and rock which had been dredged and sculpted to form it! We had to re-engage brains though for the afternoon activity, which was where we, as ECRs, had to distil all our ideas on the Declaration from the bus journey into a text which we would present the following day to John Gale of IEA GHG at the 7th Dutch CCS Symposium.  With public acceptance a key issue in the development and deployment of CCS, getting the text right on our Declaration was very important to ensure that the public, as well as other stakeholders, are in some way reassured that the entire CCS process-chain is being researched in detail across multiple institutions.

Our declaration is as follows:

We declare that we will: 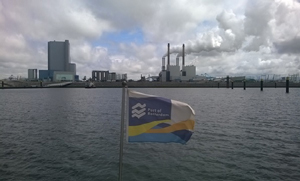 We wrapped the day up with a bus tour around the E.ON site, showing us the outside of both coal power stations. For safety reasons, we could not get to see inside the power station.  While safety is, of course, paramount, it was a shame that E.ON were not able to engage and educate researchers fully with a tour of the inside of the buildings.

On the bus trip back to Amsterdam we got another opportunity to present our work amongst small groups again. And a most entertaining day was capped off with beers, burgers and World Cup football back in Amsterdam! We had a thoroughly enjoyable, educational, and enlightening day, and we extend our many thanks to CATO-2 and UKCCSRC for organising such a unique event where we were able to meet and network with many of our future colleagues.