While in Glasgow for the Strathclyde Biannual Meeting, the Centre’s Independent Advisory Panel (IAP), Board, and Coordination Group were kindly invited by IAP Vice-Chair Richard Smith for an evening of networking and whisky at the Auchentoshan distillery, hosted by Howden Group. As well as a great chance to taste Auchentoshan’s unique range of triple-distilled whiskies, matured in bourbon, sherry, and even Bordeaux wine barrels, the evening was an opportunity to see CO2 in a different context, as the group got up-close to the delights of fermentation taking place in the distillery’s Oregon pine washbacks. The photos below show that when concentrated CO2 is wafted on your face, you know about it! The question of whether this CO2 might be a valuable source for research and industry is one that UKCCSRC Director Jon Gibbins hopes to take forward. The group was expertly guided on the tour by Senior Visitor Centre Assistant Neil Matthew, who gave a very engaging and entertaining explanation of the distillation process and proved more than ready for the questions of the researchers and industry experts in attendance. 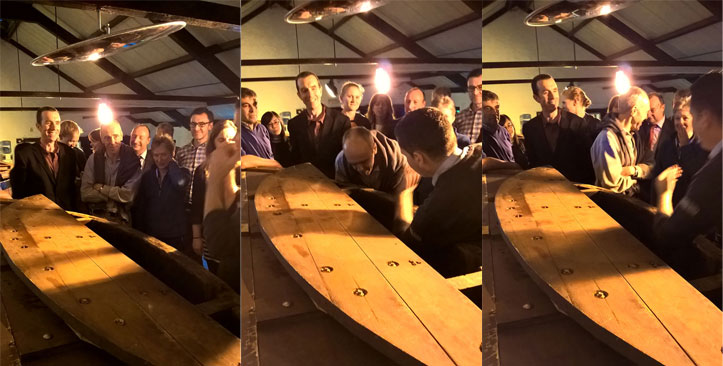 The UKCCSRC would like to thank Richard Smith and Howden Group for this great networking event, and we hope to see the IAP, Board, and Coordination Group together again for an equally enjoyable meeting alongside the Manchester Biannual in April 2016.