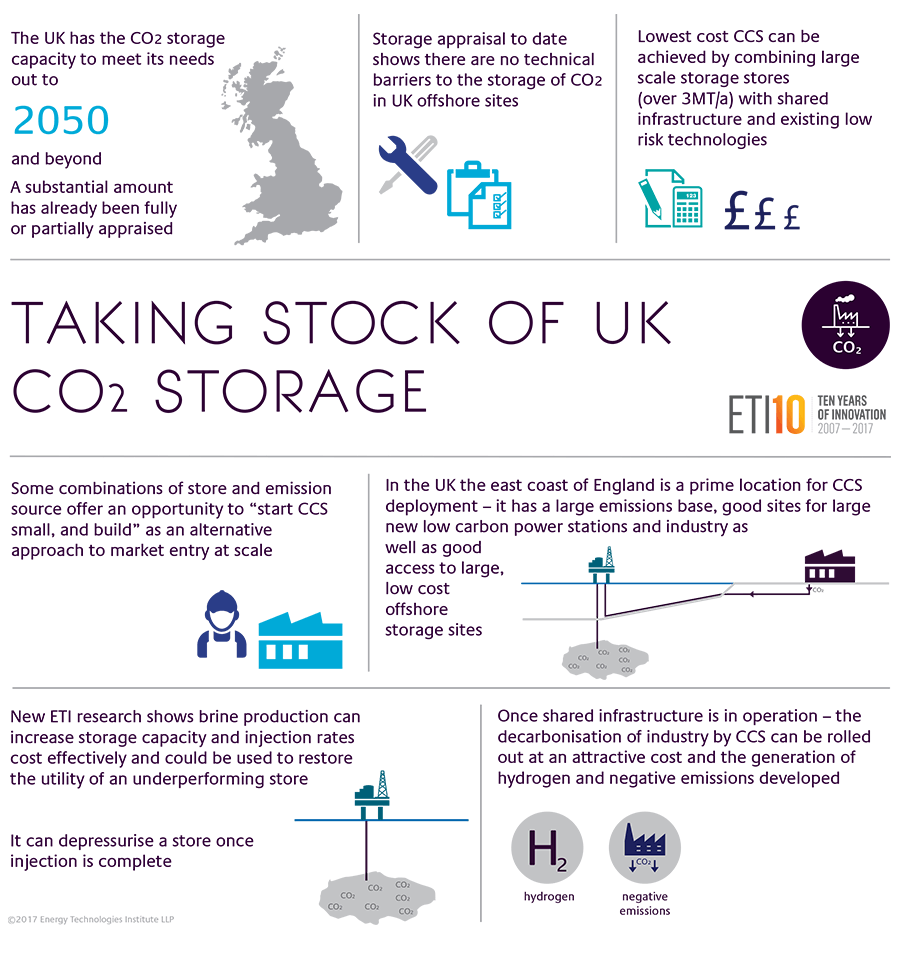 The original article can be found here.

“Taking stock of UK CO2” highlights what has been learnt since the Government cancelled its two CCS demonstration projects at the end of 2015.

It shows that the UK has more than enough potential CO2 storage sites to meet its needs out to 2050 and a substantial number of these sites have already been fully or partially appraised.

Based on the appraisal work carried out to date (by ETI and other parties) which covers a broad range of the types of stores available, there appears to be no significant technical barrier that would limit the CCS industry developing at scale in the UK from a number of strategic shoreline hubs.

The east coast of England has been identified as a prime location for CCS deployment as it has a large emissions base, there are good sites for large new low carbon power stations and industry and it is close to large, low cost offshore storage sites.

Once shared infrastructure has been developed then the decarbonisation of industry by CCS can be rolled out at an attractive cost and the generation of hydrogen and negative emissions developed.

Achieving the UK’s legally binding 2050 carbon targets without deploying any CCS is very likely to result in substantially higher costs. Based on ETI systems modelling delaying its implementation adds an estimated £1-2bn a year throughout the 2020s to the otherwise lowest cost options for an energy system reducing carbon emissions.

CCS is particularly attractive as it is suitable for power generation, the capture of industrial emissions, providing new low carbon energy supplies (eg hydrogen) through the gasification of various feedstocks and delivering “negative emissions” (the removal of CO2 from the atomosphere) when used in combination with Bioenergy (BECCS).

The report can be found at http://www.eti.co.uk/insights/…

During 2017 the ETI is releasing technical data and reports from projects delivered across its technology programmes over the last 10 years. Earlier this year it released over 100 documents on its website from its CCS technology programme on the analysis it has undertaken to date in this area to help inform the debate on CCS in the UK. Information from its CCS programme can be found at http://www.eti.co.uk/programmes/carbon-capture-storage