See the full article, that includes videos, on the Imperial College London website 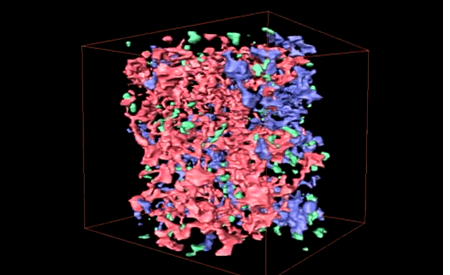 The discovery by researchers from Imperial could lead to a range of improvements including advances in Carbon Capture and Storage (CCS). This is where industrial emissions will be captured by CCS technology, before reaching the atmosphere, and safely stored in rock deep underground.

Miles below the surface of the Earth different types of fluids are flowing through the microscopic spaces between the grains inside rocks.

Scientists from the College have used the Diamond Light Source facility in the UK to make 3D videos that show in more detail than ever before how fluids move through rock.

Previously, scientists have used a formula for modelling how fluids move through rocks. It’s called Darcy’s Extended Law and the premise of it is that gases move through rock via their own separate, stable, complex, microscopic pathways. This has been the underpinning approach used by engineers to model fluid flow for the last 100 years.

However, the Imperial scientists have discovered that rather than flowing in a relatively stable pattern through rocks, the flows are in fact very unstable. The pathways that fluids flow through actually only last for a short period of time, tens of seconds at most, before re-arranging and forming into different ones. The team have called this process dynamic connectivity.

The importance of the discovery of dynamic connectivity is that engineers around the world will now be able to more accurately model how fluids flow through rock.

Dr Catriona Reynolds, lead author on the study who completed her PhD through the Qatar Carbonates and Carbon Storage Research Centre in the Department of Earth Science and Engineering at Imperial, said: “Trying to model how fluids flow through rock at large scales has proven to be a major scientific and engineering challenge. Our ability to predict how these fluids flow in the subsurface is not much better than it was 50 years ago despite major advances in computer modelling technology. Engineers have long suspected that there were some major gaps in our understanding of the underlying physics of fluid flow. Our new observations in this study will force engineers to re-evaluate their modelling techniques, increasing their accuracy.”

To create the 3D images the researchers in today’s study used the synchrotron particle accelerator at the Diamond Light Source. The synchrotron enables the researchers to take 3D image at speeds much faster than a conventional laboratory X-ray instrument – around 45 seconds compared to hours for a laboratory based instrument. This enabled them to see the dynamics, which had not been previously observed before.

However, an even higher time resolution would significantly enhance the observations. These fluid pathways re-arrange themselves quickly, so ideally the team would like the observations to capture every 100th of a second. This time resolution is only possible right now using optical light from microscopes combined with high-speed cameras. However, they are limited in their ability to observe fluids moving through real rocks.

The next steps will see the team attempting to overcome this technological obstacle using a combination of novel optical and X-ray imaging techniques. This could enable them to model fluid flow on a large scale, which would be of use for modelling CO2 storage, the production of oil and gas, and the migration of fluids deep in the Earth’s crust.

The research is published today in the journal Proceedings of the National Academy of Sciences and funded by Engineering and Physical Science Research Council’s Doctoral Training Scholarship Scheme and supported by the Qatar Carbonates and Carbon Storage Research Centre, funded jointly by Qatar Petroleum, Shell and the Qatar Science and Technology Park.

See the full article, that includes videos, on the Imperial College London website